AFC North: Division of Just Whatever in 2018 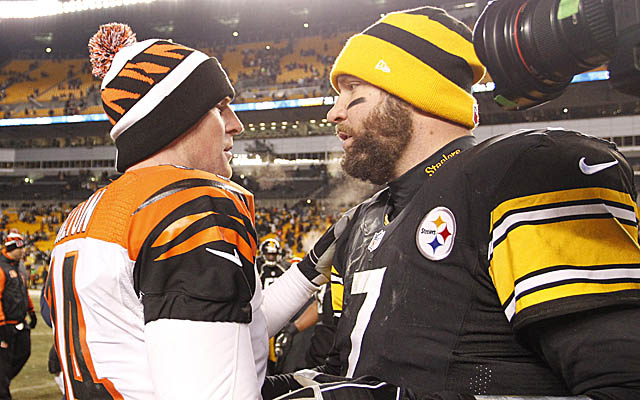 As I sit down to write this, I cannot help but feel that this division is one giant helping of “meh.” Can we really expect the two teams on top, Baltimore and Pittsburgh, with their aging quarterbacks, to be any better than they were last year? What about the Bengals? The Browns will be better, but just take a look at Hue Jackson’s record in Cleveland, ANYTHING is better.

Pittsburgh should and will win this division, by default. As Ben Roethlisberger deteriorates, so does any chance of the Steelers making any noise in the post-season. The issue within the AFC North is just that no one else got substantially better to challenge Steeltown for AFC North supremacy. Roethlisberger, Brown, and Bell will do enough, and stay healthy enough, to limp this team into the post-season and then make a quick exit.

Baltimore is somewhat intriguing and is the only team that could make a run at Pittsburgh for the divisional crown. They will have the best defense in the division, which should keep them in most games. However, I am concerned as to where the points are going to come from. I expect them to be in the wildcard hunt until Joe Flacco struggles down the stretch and they miss the playoffs. Calls for Lamar Jackson in Baltimore will be heard loudly as the Ravens close out their 2018-2019 campaign.

Cincinnati is going to be largely the same team we saw on the field all of last year. This is an offense with names like AJ Green, Joe Mixon, and Tyler Eifert, however this unit could not find the end zone for the first couple of weeks of 2017. Back leading the offense is Andy Dalton, who has been the epitome of average since a “breakout” 2015 season. Dalton has been bad enough that this team will again miss the playoffs, but just good enough where his starting job is not in jeopardy. Again, this team will hover around 8-8, beat some teams that they shouldn’t and lose to some teams they shouldn’t. Cue your Marvin Lewis jokes.

Now comes the time where we talk about the light at the end of the tunnel for the Browns, as we do each year right after the draft. I will still stand by my year long prediction that Josh Rosen was the class of the QB corps in this draft and that the Browns got it wrong. However, there is no denying that the Browns brass made this team better by completely revamping the roster. This team got better at quarterback, wide receiver and in the secondary. These are the areas you need to excel in the 2018 version of the NFL. They will be the doormat of this division again, but keep an eye on the regression of Roethlisberger, Flacco, and Dalton. This division is about to be wide open and the Browns have set themselves up to challenge for the division in a few years.

Overall, expect more of the same out of the AFC North in 2018-2019. If you’re not an invested fan of one of the teams in this division, then it should not excite you.