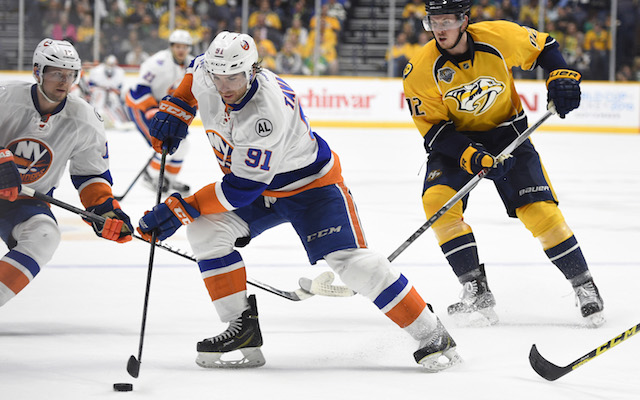 On Sunday, July 1st, John Tavares decided to sign with his hometown Maple Leafs for a 7 year, $77 million contract. He has recently released a letter explaining his logic after successful season after successful season with the New York Islanders. After remarks earlier in the year where he said he wished to stay in New York, with the team that drafted him 9 years ago, he left Islanders fans heartbroken. His letter depicted his struggle with where he should go in free agency. He openly discussed the “breakdown” he wondered if he was having at his home at the gravity of the decision he had to make between staying with the team who gave him the first shot or signing with the organization he grew up dreaming of playing for as a boy.

He went on to discuss how great he was treated by the organization, summarizing how draft night went, and overall how he was reluctant to leave the team. He then went on to describe his memories of watching the Maple Leafs as a kid.

As heartwarming (Or wrenching for Islanders fans) as this all is, it may be time for the Islander faithful to put the 2011 Cleveland Cav fan-like reactions behind them and move on.

As for the rest of the league, it’s time to consider what the Maple Leafs look like now that they have Tavares.

Tavares will immediately become the number one center for Toronto. This will become one of the toughest lines to compete with as he will be combined with young sensation Auston Matthews and old friend Nazem Kadri. Kadri has been impressive, owning 313 pro points in his career. He has also been fined and suspended for various antics throughout his career. Having his old friend and teammate (They played together for the OHL’s London Knights back prior to 2010) around may help cool his seemingly hot head.

The name Matthews speaks for itself. This is the man that began his NHL career with 103 straight games with a shot on goal. Now imagine that type of production with a center like Tavares passing him the puck. After being drafted in 2016, Matthews already has 132 NHL points in only 144 games.

The Islanders after Tavares

The Islanders now sit in a strange situation. They have many long term contracts, essentially with role players, but not really a legitimate star. The argument could be made that this was anticipatory of them keeping Tavares around, but a couple of these signings actually occurred AFTER he went to Toronto. These signings of Ross Johnston, Leo Komarov, and Matt Martin, which are post-Tavares, make the lease sense. Unless they expect a breakout season from one of their players, one can only assume that they are preparing to either make a very surprising trade for a star, expect to lose a lot this season in order to build around a top draft pick, or expect to sign a star during next year’s free agency (Or some combination of these). Overall, it will be interesting to see where New York’s Long Island team goes from here.

Join us on Telegram to get even more free tips!
« Making the Case to Sign Rick Nash
Blackhawks Dump Hossa’s Salary, Re »
SportingPedia covers the latest news and predictions in the sports industry. Here you can also find extensive guides for betting on Soccer, NFL, NBA, NHL, Tennis, Horses as well as reviews of the most trusted betting sites.
NHL Betting Tips, Predictions and Odds 800