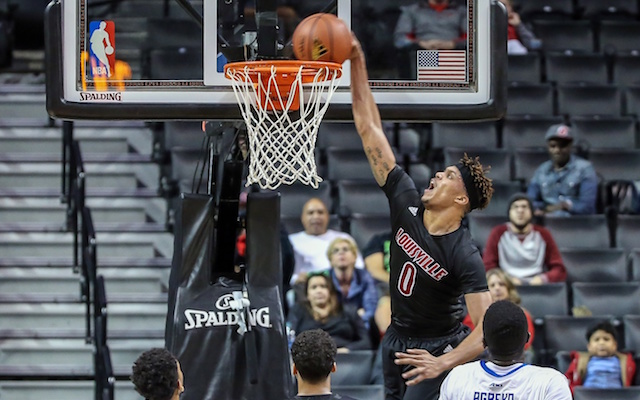 The Golden State Warriors signed Damion Lee yesterday. What makes this signing interesting? Read below to find out more.

It is well known that Stephen Curry is the son of NBA great Dell Curry, and has a brother in the league named Seth. What is not widely known, is that Steph has a sister named Sydel, who played Volleyball at Elon University. Sydel is engaged to be married to… who else but new signee Damion Lee.

Lee, who played most of his college ball at Drexel, suffered a torn ACL in a game in 2013. He returned in 2015, and then with one year of eligibility left, transferred to Louisville. He would proceed to go undrafted in 2016. And with no opportunity to go pro, he opted for the G-League. Playing in sixteen games for the Maine Red Claws in 2016-17, he averaged 18 points, 6 rebounds, and 3 assists per game, while shooting 47% from the floor. He also hit 2.6 threes per game while shooting 46.6% from deep.

The following season, playing for the Santa Cruz Warriors, he averaged 16 points, 5 rebounds, and 3 assists per night. His strong play continued, and this is what begun to get him noticed. Before he knew it, he had been signed by the Atlanta Hawks, and was getting big minutes.

Playing in fifteen games for the Hawks, Lee started eleven of them. He averaged 11 points, 5 rebounds, and 2 assists per game, playing 26.9 minutes per night. Most of these minutes came after Kent Bazemore was shut down for the season. He struggled with his three point shot, where he made just 15 out of the 60 long balls he put up.

The G-League exists to give players like Lee, who are not seen as “NBA ready”, a chance to play competitive basketball immediately after college, while showing the pro teams how they have improved. This worked well for Lee, especially, who is going to be continuing in the pros, after signing his contract with the Warriors.

Unlike last season, where his contract was fully guaranteed and he could spend however long he wanted with his team, this time is different. Lee’s contract is a two-way deal, and so it only allows him up to 45 days of service with the Warriors, including practice days. After those days have been used up, the team can either sign him to a guaranteed contract and use a roster spot on him, or let him walk.

Depending on the health of the Warriors this season, they may not be that big of an issue. However, Tyrone Wallace, on a two-way contract with the LA Clippers a year ago, had only two days left on his contract with the Clippers in the midst of a playoff race. They didn’t have any roster spots open for him and had nobody to release, so they kept him in the G-League for a number of weeks. This hurt their chances tremendously.

Of course, Damion Lee is playing for the best team in the world, and likely won’t exceed his 45-day limit. So, Lee is now an honorary Curry, and playing alongside Steph. What a time.

Join us on Telegram to get even more free tips!
« Mbah a Moute Heads back to Los Angeles
Clint Capela: Free Agency Question Still Burning »
SportingPedia covers the latest news and predictions in the sports industry. Here you can also find extensive guides for betting on Soccer, NFL, NBA, NHL, Tennis, Horses as well as reviews of the most trusted betting sites.
NBA Betting Tips, Predictions and Odds 1372