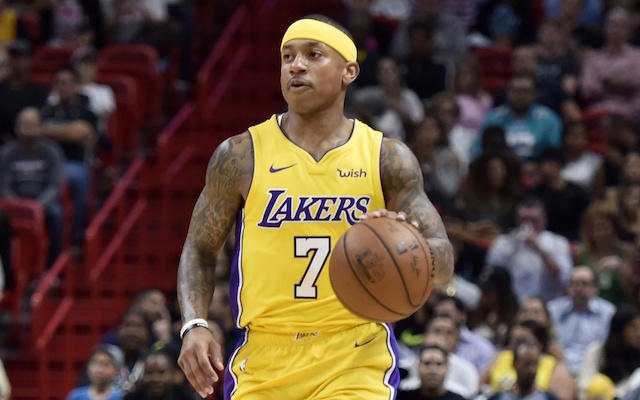 The little man is on the move! Isaiah Thomas, expected by many to sign with the Orlando Magic, agreed to a 1-year deal with the Denver Nuggets last night. Read below as go over the potential fit. The team not only signed IT last night, but sent Kenneth Faried and Darrell Arthur to the Nets to clear some salary space.

The Nuggets are paying Isaiah Thomas just $2 million on the veteran’s minimum contract they signed him too, a crazy amount for a player who averaged 30 points per game as recently as two years ago. There have been some great moments in Isaiah’s career, where he has proven doubters wrong just about wherever he has gone. He is a proven scorer, and despite his 5’9” frame, he is an absolute force to be reckoned with.

IT began his career in Sacramento, averaging 11 points, 3 rebounds, and 4 assists per game, after being the last guy selected in 2011 NBA Draft. No matter who the Kings would bring in (Jimmer, Aaron Brooks, Greivis Vasquez), he would beat them all out for minutes, and to be the starter. He never had their full trust as a consistent starter, despite his improvements. He averaged 20 points and 6 assists per game in his third year there.

After that season, he signed a 4-year deal with the Suns for $28 million. He was sharing a backcourt with two standout PG’s, Eric Bledsoe and Goran Dragic. All three guys played well, but they pulled the plug on the experiment rather quickly. He was sent to the Celtics, and this is where it began.

Thomas averaged 19 points, and 5 assists per game in 21 games of action off the team’s bench to help them get to the postseason. He became a starter the following season, and combined to average 26.0 ppg over the two years as Boston starter. He became trade bait to get Kyrie Irving to town after hip surgery, and when he finally was healthy enough to see the floor in Cleveland, he struggled. He couldn’t score well, defend well, or get teammates involved.

He was traded to the Lakers for Jordan Clarkson and Larry Nance Jr. He played 17 games before having to sit out the season. Then, finally, this brings us to the present, where he is now in Denver.

An interesting fit, Denver already has a great starting lineup intact. What they didn’t have, was a backup point guard for Jamal Murray. Thomas will not serve in the mentor role like Devin Harris did in the second half of last season, but his scoring ability could provide a punch for their second unit. He can play the instant offense role as he did in Phoenix, and his beginning in Boston.

Thomas has many doubters to prove wrong, and in the SUPER western conference, he will have many chances in big games to show the world if he’s still got it. It will be a good year for the Nuggets, IT or not, but put him on the second unit, and you’ve got a great scorer.

Join us on Telegram to get even more free tips!
« Minnesota Timberwolves: Team in Turmoil in July?
Jabari Parker Heading Back Home to Chicago »
SportingPedia covers the latest news and predictions in the sports industry. Here you can also find extensive guides for betting on Soccer, NFL, NBA, NHL, Tennis, Horses as well as reviews of the most trusted betting sites.
NBA Betting Tips, Predictions and Odds 1371