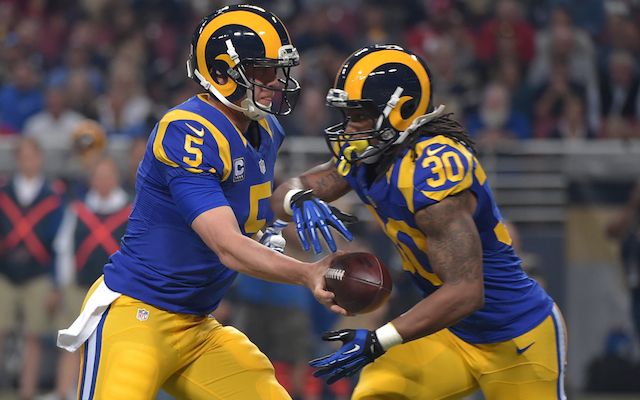 The NFC West has recently seen a changing of the guard. Gone are the days of Seattle, San Francisco, and Arizona slugging it out with elite defensive units while making the Los Angeles Rams the punching bag of the division. Instead, expect the Rams to take the next step in their progression and make a deep run in the playoffs.

What a difference a year can make for the Los Angeles Rams and quarterback Jared Goff. I do not care what he is making, but give Sean McVey a raise. His progression from year one to year two was absolutely outstanding. Year three should show us exactly what Goff is because the Rams have a target on their back and teams have had another year to try and figure out McVey’s schemes. If Goff regresses, even a lot, the Rams will be just fine. The 2017 Rams had one of the leagues best defenses and all they did was go out and add Peters, Suh, Talib, and Shields on that side of the ball. The Rams have Super Bowl aspirations and rightfully so. Los Angeles will win at least 12 games, enjoy a few home playoff games, and represent the NFC in February of 2019.

It feels very strange to pick the San Francisco 49ers to finish above Seattle in the standings, but here it is. The Niners have found their quarterback of the future in Jimmy G, who immediately made this offense go from horrific to above-average in 2017. Garropolo is still on the upward trajectory and no one quite understands what his ceiling exactly is. Cornerbacks typically do not age well, but the addition of Richard Sherman upgrades the secondary and gives this young Niners squad some attitude and edge. However, I believe we do need to pump the brakes on this squad’s Super Bowl dreams for the time being. They are young, relatively inexperienced and have to play the Rams twice. I think 9 wins is realistic, while quietly remaining in the wildcard hunt all season.

The Legion of Boom no longer exists in Seattle. What DOES exist in Seattle these days? If you answered only Russell Wilson, Doug Baldwin, and Pete Carroll then you may be correct. Surprisingly, I believe that alone will get them to 7 or 8 wins, but Russell Wilson will have to probably play the best season of his career for that to happen, which is no small task considering some of his past brilliance. Trades, free agency, and injuries have left this defense with tons of questions. This is a unit that only a few years ago had an impact player at every position, now I would be impressed to see how many starters fans outside of Washington can name without an internet search. The mighty have fallen in the NFC West, but Wilson and the immense home field advantage that Seattle has will help them win some games they shouldn’t. Expect 7 wins from this team and a 2019 offseason with an abundance of change.

Arizona is right smack dab in the middle of a rebuild, which never bodes well for the on-field product. Sam Bradford was brought in to keep the seat warm for Josh Rosen and with Bradford’s injury history, that means that Rosen needs to be ready to go Week 1. I have said it before and I will say it again, Josh Rosen will be the best NFL quarterback to come out of the 2018 NFL Draft. Until he is ready though, the quarterback position is a liability in Arizona. David Johnson returns from his season-ending injury, but expect him to face quite a few 8 man boxes until someone can throw defenses out of it. It is going to be an ugly year for the Cardinals. They are clearly the worst team in the division and have a tough strength of schedule. Anything more that 4 wins would surprise me.

Join us on Telegram to get even more free tips!
« NFC East: Back to Back Super Bowl Champions?
Minnesota and Green Bay Class of NFC North »
SportingPedia covers the latest news and predictions in the sports industry. Here you can also find extensive guides for betting on Soccer, NFL, NBA, NHL, Tennis, Horses as well as reviews of the most trusted betting sites.
NFL Betting Tips, Predictions and Odds 332