Ray Emery Dead At 35: Here’s a look back on his NHL Legacy 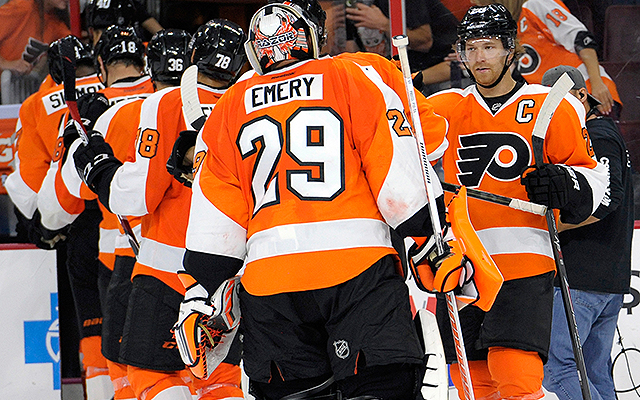 The hockey world stopped turning for a little bit on Sunday. Ray Emery passed away after apparently drowning at the Royal Hamilton Yacht Club in Hamilton, ON.

Emery’s NHL career lasted about a decade and spanned several NHL teams. His NHL beginning came in the 2001 NHL Entry Draft. He was selected by the Philadelphia Flyers in the humble 4th round, at 99th overall. He played his AHL hockey for the Binghamton Senators for a few Seasons before joining the Flyers in 2005-06. He made an impact immediately, going undefeated for his first 9 games of his career (As a back up), which became an NHL record.

He returned to the Flyers after a one-season stint in the KHL. He was then diagnosed with avascular necrosis, which most athletes would never recover from. “Sugar Ray” and his fighting spirit never gave out, though, and after years of excruciating workouts and recovery, he finally returned to the NHL. On March 11th, 2011, he restarted his career with the Anaheim Ducks, for whom he promptly rattled off 6 straight brilliant wins.

Perhaps the highlight of his career was the 2012-2013 season, also with the Blackhawks. Emery made an impact, again as a backup. Backing up Corey Crawford, Emery became the first and only NHL goalie to ever begin a season with 10 undefeated contests. He extended the record to 12 undefeated games before his first loss of the season. That season, he gave up only 1.94 goals per game and won the William M. Jennings trophy along with friend and teammate Corey Crawford. This season, he also won the only Stanley Cup of his career when the Blackhawks defeated the Boston Bruins.

After a hard-fought shutout over the Blues in 2016, Crawford reminisced about Emery’s impact on him as a young goalie: “As a goalie, I’ve never seen a guy be so focused and ready for a game,” Crawford said. “I was kind of doing the opposite — being nonchalant and doing other stuff and not having a routine. You get in that physical routine that just makes you ready mentally. You trick yourself into knowing that it’s game time and time to play.”, Crawford told the Chicago Tribune. It’s safe to say that Emery’s focused and competitive nature had a big impact on Crawford, who went on to win another Stanley Cup in 2015.

While he spent his career mostly as a journeyman backup, he made many friends, many of who expressed their condolences Sunday after hearing the news

Also, Emery ended his NHL career with some impressive accomplishments and numbers: over 15,000 minutes, a career .906 save percentage, 16 shutouts, 2.70 goals against average, 145 wins, and a competitive fighting spirit that has surely impacted many teammates, hockey fans everywhere, and the game itself.

Join us on Telegram to get even more free tips!
« Blackhawks Dump Hossa’s Salary, Re
Detroit Easing into New Era with Free Agents and Draft. »
SportingPedia covers the latest news and predictions in the sports industry. Here you can also find extensive guides for betting on Soccer, NFL, NBA, NHL, Tennis, Horses as well as reviews of the most trusted betting sites.
NHL Betting Tips, Predictions and Odds 800