Twitter
« Wizards Making Quiet Run at Being Team to Beat in the Eastern Conference
Celtics Get Smart; Sign Guard to 4 Year Deal » 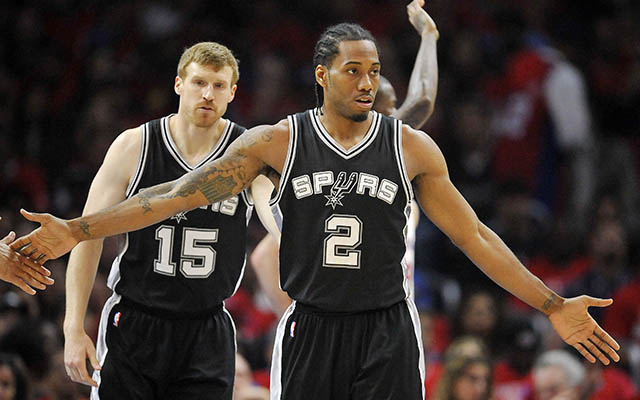 While most of were asleep last night, the Raptors and Spurs agreed to a shocking trade. Kawhi Leonard was sent along with Danny Green to the Raptors for Jakob Poetl, DeMar DeRozan, and a 2019 1-20 protected first round pick. Read below as we grade the trade for each side.

Beginning with the Raptors, this is a potential major get, and game-changing move for them. They bring in a 2X All Star, Finals MVP, and 2X Defensive Player of the Year, who has become an elite scorer, to pair with Kyle Lowry. Kawhi averaged 25 points per game in his last fully healthy season. They also add a phenomenal 3-and-D wing in Danny Green.

Green’s scoring numbers have been down in recent years, but he’s maintained good health, and been a consistent option for Gregg Popovich for a number of years now. He spent eight seasons in San Antonio, seven of which he was a primary starter. His value was on display in the postseason, when he’d start hitting threes at a pace that was historic. He had the NBA Finals record for most threes in a game at one point, in the Spurs series with Miami.

Toronto also PROMISED DeMar DeRozan at Summer League they would NOT trade him, and so this shows a lack of loyalty and that it’s a business. Some dishonesty was visibly apparent in the Raptors front office decision. However, DeMar has struggled during the last few postseasons, and so Kawhi is a major upgrade as a star to pair with Lowry. Green fills in DeRozan’s starting slot, and OG Anunoby is now the sixth man.

GRADE FOR RAPTORS: A-

This is one of the bigger, perhaps the biggest trade in Spurs history. The year-long beef with Kawhi finally comes to its end, as he’s off to Canada. In his place now, is DeMar DeRozan, who has averaged 20+ points per game for each of the past five seasons. His scoring ability has never been in question, but his shot selection, that’s another story. As good as he is in the regular season, he struggles to get buckets in playoff games.

That is the only knock on DeMar, long his consistent love of mid-range shots in a league where most players are taking shots in the paint or from beyond the arc. He is a very coachable player but needs to play smarter ball, or he will find himself on Pop’s bench very early in some games.

The other addition for the Spurs, is big man Jakob Poetl. Playing in all 82 games last year, he averaged 7 points, 5 rebounds, and 1.2 blocks. He averaged 18 minutes a night.. The team’s only bigs were LaMarcus Aldridge and Pau Gasol, and so Poetl will definitely be seeing some minutes. He will be a good fit for their second unit, coming into games with a post presence.

All in all, this is a decent haul for the Spurs, but most around the league expected more.

GRADE FOR SPURS: B

Join us on Telegram to get even more free tips!
« Wizards Making Quiet Run at Being Team to Beat in the Eastern Conference
Celtics Get Smart; Sign Guard to 4 Year Deal »
SportingPedia covers the latest news and predictions in the sports industry. Here you can also find extensive guides for betting on Soccer, NFL, NBA, NHL, Tennis, Horses as well as reviews of the most trusted betting sites.
NBA Betting Tips, Predictions and Odds 1346