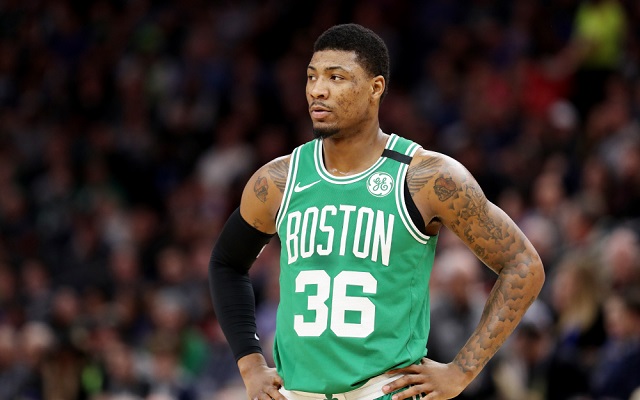 After a long summer of uncertainty, the Boston Celtics finally came to an agreement with their RFA guard Marcus Smart yesterday. A 4-year $52 million dollar deal was the price, and now the two sides will be together until Marcus turns 28. Read below for the grade on the deal for Boston.

It’s very tough to put a price on the value of Smart. He has shot below 37% from the floor and below 34% from the three-point line in each of his four seasons. At the same time, he’ll miraculously hit a three-pointer late in a game when the team needs him.

His true value lies on the defensive side of the ball, where he’s always diving for loose balls to save possessions, and locking down whoever his matchup is. He drew a pair of charges on LeBron in game seven of the ECF, something that very few are really capable of. He’s tremendous at coming up with steals and forcing held-balls.

He’s filled in a starter when needed but primarily been the sixth man in his time with the Celtics. He has been able to play any position from point guard to power forward, with no questions asked. Getting back to his inability to shoot, he shot under 50% from the field in 13 of fifteen playoff games he appeared in, including going 1-10 in the decisive game 7 against the Cavs. So, in essence, he drew more charges (2), than field goals he made (1).

The question with Smart was never about the fit. We’ve covered that. It was how much do you pay him, and can you afford to keep him? A guy that’s never been a significant scorer, but has always been a big-time hustle player. You’re already paying max money for Al Horford and Gordon Hayward, plus Kyrie Irving is due for a new contract after the season. Jaylen Brown and Terry Rozier are also due for big raises soon.

Paying Smart $13 million annually will make him the third highest-paid Celtic in 2018-19. With their roster full of young players, most of the contracts are paying guys $5 million or less per year. For now, this is looking good and like a winning figure. Neither the Nets or Kings were able to sign Smart to an offer sheet, so the Celtics were able to pay him what they wanted to, and Smart liked it, so he and his agent Happy Walters said yes.

This is winning move for Boston, as their defensive leader, perhaps the best they’ve had since Tony Allen is locked up guaranteed for four more years. He and Terry Rozier helped the team form their gritty identity without their stars in the postseason and to come within a game of the NBA Finals. Smart did this while working his way back from a late season injury, only missing four playoff games.

Well done by Boston, keeping Mr. Hustle around for the foreseeable future! He keeps the Celtics the team to beat in the Eastern Conference in 2018 – 2019!

Join us on Telegram to get even more free tips!
« Kawhi Leonard Traded to Toronto
Sacramento Kings: Making Moves to Improve »
SportingPedia covers the latest news and predictions in the sports industry. Here you can also find extensive guides for betting on Soccer, NFL, NBA, NHL, Tennis, Horses as well as reviews of the most trusted betting sites.
NBA Betting Tips, Predictions and Odds 1369