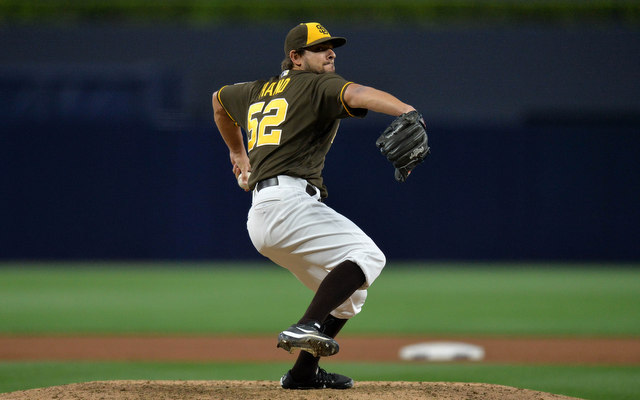 The 2016 World Series matchup between the Chicago Cubs and Cleveland Indians played out as a battle of the bullpens. Both teams reached the World Series on the strength of dominant and deep bullpens. It appears that each club is trying to recreate that recipe for success this season.

The Cleveland Indians acquired reliever Brad Hand from the San Diego Padres, while the Cubs were able to pick up Jesse Chavez from the Texas Rangers. Both pitchers should play a key role in the playoff race for their respective teams.

The Cleveland Indians were desperate to pick up relief help, after having one of the worst bullpens in baseball during the first half of the season. Cleveland was able to make a deal for Padres closer, and two-time All-Star, Brad Hand. Hand not only helps the Indians out this season but will be under team control for at least the next three seasons. The Indians could lose both, Cody Allen and Andrew Miller to free agency after next season.

Hand is just 28 years old and has already been named to the National League All-Star team twice as a member of the San Diego Padres. This season Hand is just 2-4 with a 3.05 earned run average, but does have 24 saves for the last-place Padres. The hard-throwing left-hander has racked up 65 strikeouts in just over 44 innings pitched this season.

The trade for Hand did cost the Indians their most prized minor league prospect, Francisco Mejia. Mejia has spent the majority of the season at Triple-A but has appeared in one game with the Indians this season. Mejia has belted seven homers to go along with a respectable .279 batting average this season at Triple-A. Mejia is widely considered the top catching prospect in baseball, and is the 5th ranked prospect in all of baseball, according to Keith Law.

The Chicago Cubs placed closer Brandon Morrow on the disabled list prior to Thursday night’s game with the Cardinals, but quickly made a trade to help ease the loss. Chicago was able to land right-handed pitcher, Jesse Chavez, from the Texas Rangers in exchange for minor league pitcher, Tyler Thomas. Chavez has spent most of his career as a reliever, but could be converted to starter if the need arises for the Cubs.

Chavez, 34, had made 30 relief appearances for the Rangers this season, and had a 3.51 earned run average. The veteran righty will join a deep and talented Cubs bullpen. It is unknown how long Brandon Morrow will be out for the Cubs with right biceps inflammation. Morrow has struggled with injuries this season, but when healthy has been one of the best relievers in baseball. In his first season with the Cubs, Morrow has posted a 1.47 earned run average to go along with a career high 22 saves.

Join us on Telegram to get even more free tips!
« Machado Traded to Los Angeles Dodgers
Ohtani To Resume Throwing »
SportingPedia covers the latest news and predictions in the sports industry. Here you can also find extensive guides for betting on Soccer, NFL, NBA, NHL, Tennis, Horses as well as reviews of the most trusted betting sites.
MLB Betting Tips, Predictions and Odds 241