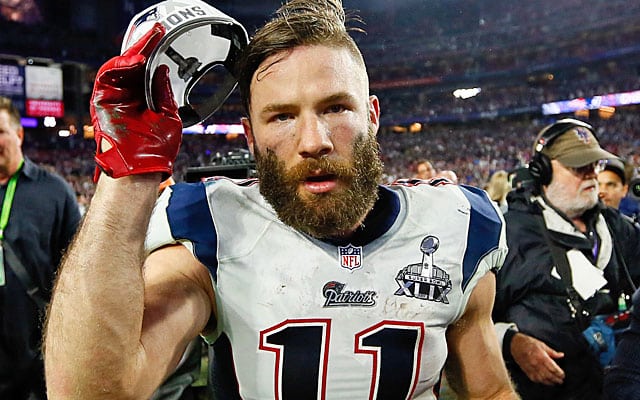 New England Patriots wide receiver Julian Edelman will not sue the NFL in federal court after an arbitrator recently upheld his four-game performance-enhancing drug suspension. Edelman will accept his four-game suspension, beginning week one, making him eligible to return to the field in Week 5 when the Patriots take on the Indianapolis Colts in Foxboro. Edelman has been a favorite of Tom Brady when he has been healthy. In 2016, Edelman and Brady connected for 98 catches and over 1,100 yards.

Edelman was considering the route of Brady, who took legal action against the NFL in an attempt to block his suspension. In this case, Edelman pointed to a chain of custody issues with his sample and also that the substance he tested for is unknown to the league. In other words, the league believes that it was a PED, but they cannot put a name on the actual substance in Edelman’s sample. One major difference between Edelman’s case and Brady’s “deflategate” case, is that the arbitrator who heard Edelman’s appeal was jointly selected by the NFL and the NFLPA, while Brady’s arbitrator was unilaterally selected by the NFL. Clearly, this difference muffles any potential claim by Edelman that the appeal was expressly biased against him.

Edelman’s positive test for a PED has only furthered tensions in New England. Edelman employs the same trainer, Alex Guerrero, as Tom Brady and Rob Gronkowski. It is no secret that Patriots head coach Bill Belichick and Guerrero are not on the best of terms. Now, Guerrero and his facility, the TB12 Sports Therapy Center, are at least indirectly responsible for Belichick being without his top wide receiver to start the year. This is not uncommon ground for the Patriots though as Edelman missed all of 2017 after tearing an ACL in a preseason game last year. An overall theme of the Brady led Patriots, with a few exceptions, has long been the quarterback’s ability to find success with little to no investment in the wide receiver position.

Tom Brady will have some new faces and hands to throw to when New England opens the season on September 9th against the Houston Texans. The Patriots top two options in 2017 from the wide receiver position are no longer on the roster. Brandin Cooks was traded to the Los Angeles Rams and Danny Amendola signed with the Miami Dolphins in the offseason. To offset these transactions, New England brought in Jordan Matthews and Cordarrelle Patterson. Matthews is a possession receiver who will provide help in the slot, while Patterson has never found traction at the wide receiver position, instead of making his career mostly on special teams. These two will team with Chris Hogan, Malcolm Mitchell, Kenny Britt, Phillip Dorsett, and draftee Braxton Berrios to hold down the fort at wide receiver until Edelman returns. Also, do not forget about that man lurking at the tight end position who can take some pressure of the wide receiver corps.

While serving his suspension, Edelman will be allowed to attend training camp and play in preseason games. His presence should provide some leadership and guidance to a young, inexperienced receiving corps.

Join us on Telegram to get even more free tips!
« Roquan Smith Officially Holding Out
Andrew Luck Cleared for Camp »
SportingPedia covers the latest news and predictions in the sports industry. Here you can also find extensive guides for betting on Soccer, NFL, NBA, NHL, Tennis, Horses as well as reviews of the most trusted betting sites.
NFL Betting Tips, Predictions and Odds 332