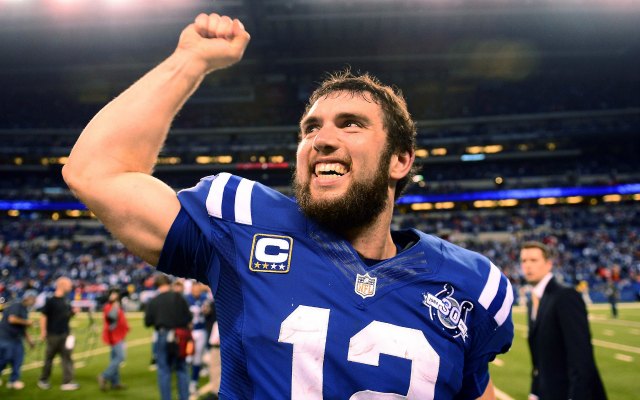 Indianapolis Colts quarterback Andrew Luck has been cleared to participate in the team’s training camp without any limitations. The Colts are set to begin camp on this Thursday, when all veterans are set to report. Obviously this is good news for the Colts, as Luck missed the entire 2017 following right shoulder surgery in January of 2017. He was due to return to the field last season following that surgery but flare ups and pain kept him on the sidelines the entire season.

The Luck situation was starting to become a recurring joke or pun across the NFL. Every week there were reports coming out of Indy on whether or not Luck had thrown a football yet. Only recently in June, during the teams mini camp, did Luck finally throw a football in front of members of the media. The optimism that came from that showing as now led to fruition with the reports of Luck’s availability for training camp.

The team is going to be cautious with Luck moving forward, an obvious decision for a guy who was picked number one overall in the 2012 NFL Draft and quickly became the face of the franchise. Colts GM Chris Ballard is on record stating that Luck will not throw every day in camp, but that they hope to give him as many reps as possible. After all, this is a guy who missed a full season of NFL football. Indianapolis has a new coaching staff and players have come and gone in the past year. Luck will need as many reps as possible to learn the new offense and develop relationships with a few new targets. This should not take too long though as Luck is widely known for his football knowledge and ability to quickly consume a play book.

For the Colts, this news completely changes their outlook on the 2018 season. Without Luck at quarterback, Indianapolis was destined to be the trash heap of the division. With Luck behind center, there is little doubt that the Colts are immediately injected into the playoff race. That is, if Luck can quickly return to the Andrew Luck of old. Jacksonville is favored to win the division but have questions on the offensive side of the ball. Houston has a quarterback coming off of a season ending injury as well, so there are definite question marks about what kind of play they will get behind center. Tennessee should win 7-9 games, but does not really excite anyone. In other words, it would not be shocking to see a MVP caliber Andrew Luck lead this team to a playoff berth. After a dismal 4-12 season last year, it is no surprise that Colts’ fans cannot contain their excitement.

The Colts open the preseason on August 9 in Seattle. It will be interesting to see how cautious the Colts brass and new coaching staff are when the pads come on. When Luck takes the field for the regular season opener against the Bengals, all eyes will be on him. It will be a welcome sight. Luck has proven to be one of the best quarterbacks in the game when healthy. As an NFL fan, we should all be rooting for the return of Andrew Luck.

Join us on Telegram to get even more free tips!
« Julian Edelman To Serve Suspension
Randy Gregory Reinstated »
SportingPedia covers the latest news and predictions in the sports industry. Here you can also find extensive guides for betting on Soccer, NFL, NBA, NHL, Tennis, Horses as well as reviews of the most trusted betting sites.
NFL Betting Tips, Predictions and Odds 332