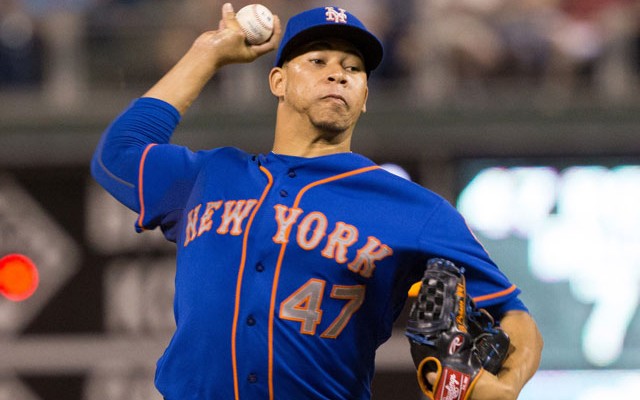 The Oakland Athletics have been one of baseball’s hottest teams since June, and now appear to be going all in this season. The Athletics completed a trade with the New York Mets on Saturday that will land them former Mets closer, Jeury Familia. Familia will now join an Oakland bullpen that was already considered one of the best in baseball.

The Oakland Athletics have played themselves right back into playoff contention, and are just four games out in the American League Wild Card race. The Athletics are trying to chase down division rival, Seattle for the second Wild Card spot in the American League. The A’s are 55-43, and are 7-3 in their last 10 games played. This is the first time since 2014 that the Athletics are in a position to add pieces at the deadline, and they wasted no time in adding Familia.

Oakland will be sending Bobby Wahl and Will Toffey to the New York Mets in exchange for Familia. The Mets will also receive an additional one million dollars in international bonus pool money. The Mets had been shopping Familia for the last several weeks and felt that the Athletics had the best offer, and acted quickly on the deal.

The Athletics have been almost impossible to beat once they have a lead this season. The A’s are 38-0 when taking a lead into the eighth inning this season, and are 46-0 when taking a lead into the final inning. Familia will join a talented bullpen, featuring Lou Trivino, and All-Star closer, Blake Treinen. It is unclear what role Familia will take on with the Athletics, but he has plenty of closer experience.

Familia will be leaving the only organization that he has ever pitched in at the professional level. The Mets signed Familia as a 17-year-old out of the Dominican Republic in July 2007. Familia has recorded 123 saves for the New York Mets, which is third most in team history. The 28-year-old had a career 2.66 earned run average with the Mets. Familia registered more than one strikeout per inning pitched in his successful career with the Mets.

Familia is having a solid 2018 season, after struggling both on and off the field in 2017. Familia began the 2017 season by serving a 15 game suspension for violating Major League Baseball’s domestic violence policy. Familia also spent time on the disabled list last season but appears to be fully healthy again. The hard-throwing right-hander has thrown 7 scoreless innings in the month of July.

The trade of Familia could begin a firesale for the New York Mets. The Mets have fallen into last place in the National League East, and appear to be clear sellers at the 2018 MLB Trade Deadline. The Mets will have a little over a week to decide if they are willing to trade starting pitchers, Noah Syndergaard and Jacob DeGrom, or keep them as a part of their future.

Join us on Telegram to get even more free tips!
« Ohtani To Resume Throwing
Trio of American League Aces Set to Return This Week »
SportingPedia covers the latest news and predictions in the sports industry. Here you can also find extensive guides for betting on Soccer, NFL, NBA, NHL, Tennis, Horses as well as reviews of the most trusted betting sites.
MLB Betting Tips, Predictions and Odds 241