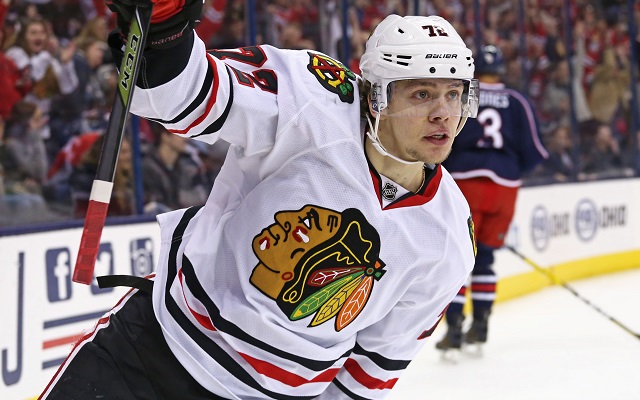 Any Blackhawks fan could think back to the 2015-16 season, watching Artemi Panarin play his first NHL minutes and eventually come to take the league by storm playing with fellow Russian Artem Anisimov and superstar winger Patrick Kane.  He had so much promise for the franchise, learning from arguably the league’s best undersized, over-skilled winger in Kane.  He also thrived in the winning culture brought on by the three recent Stanley Cups brought in by those great Chicago teams (2009-10, 2012-13, 2014-15).  He even led all NHL rookies in points during his first season, with 77 (29 more than that of first overall pick Connor McDavid.  Then, he was traded to the Columbus Blue Jackets in the trade that brought Brandon Saad back to Chicago.

Panarin, who fit well in the city of Chicago (Having moved in with a Russian-speaking family, as he did not speak English and bonded with fellow Russian players), has not exactly found Columbus as the place to call home.  Last week (July 17th, it was reported by BleacherReport that his agent had stated: “We’re not holding out for more money, because if I called [general manager] Jarmo [Kekalainen] right now, he’d probably drive up to my house and we’d put a deal together. [Panarin’s] biggest thing is…he loves the team, he loves the coach. It’s not the team or the way they treat him. It’s about, does he want to spend the next eight years in Columbus? That’s the only thing at stake right now.”  So, instead of an attempt for more money or a shot at the franchise, the lack of contract talks seem to be more of a shot at Columbus as a whole, and Panarin’s reluctance to spend better than half of his NHL career playing in such a small market.

There are several landing spots that could make sense for Panarin, as Columbus has been testing the waters for a potential trade.  Toronto seems somewhat likely, as Elliote Friedman appeared on NHL tonight last night floating the idea of Panarin on the Maple Leafs.  HE obviously would be a one-year rental with a team friendly agreement.

This move, however dominant it would potentially make Toronto, would come with its fair share of downsides.  For one, many Leaf fans would probably be wondering “Why do we need any more than we already have?”. The team already has John Tavares, Auston Matthews, and company.  Also, what would Toronto have to give up to get such a player? THere is the possibility that some combination of their depth-providing players in their lower lines and draft picks would have to be involved in this type of acquisition.

Then, Panarin would probably sign after this coming season with a team that can actually afford him, and the Leafs will be left with a mess where they will be trying to allocate their talent back into four lines after losing depth for front-end talent.  Also, many would argue that Toronto should be looking to trade for a defenseman, as their blueline depth is lacking. Should anything resembling a season-ending injury occur on the back end, it could be disastrous for this juggernaut of a team.

However you feel about such a trade, it is certainly fun to think about Panarin pairing up with someone like Auston Matthews or John Tavares on what can only be described as what would be a fun line to watch.