Dirk Nowitzki Back in Dallas for Season 21 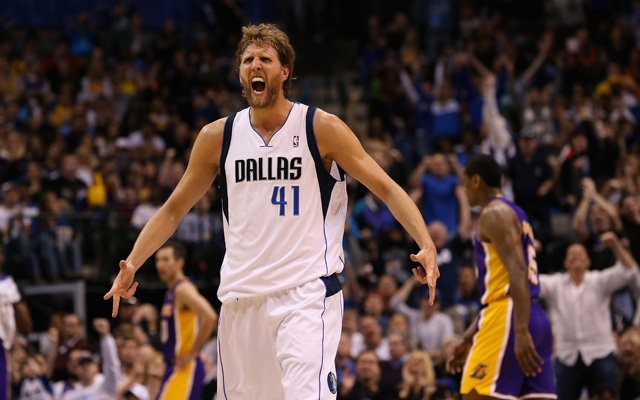 After signing a 1-year deal worth $5 million, Dirk Nowitzki will become the first player to spend twenty-one seasons with the same organization. Read below as we talk about what this means, and what some reasonable expectations for him will be.

As talented as they may be right now, the Mavericks will likely not qualify for the postseason next year, and if that happens, it happens. But if they’re able to qualify, Dirk will get a chance to go out on his own terms, trying to lead this organization he has known his whole life to a few playoff wins as a farewell. On the bright side, he is only costing them $5 million, as he wanted there to be more money to sign better players. On the flip side, Kobe’s final contract cost 2 years and $48 million, so it limited some of their free agency moves.

Because of Dirk’s selflessness, the team has been able to pay Harrison Barnes max money, and just picked up DeAndre Jordan, who will be by far the team’s best big man since Tyson Chandler. Wes Matthews, though inefficient, is making $16 mil a year, made possible thanks to Nowitzki’s sacrifice. The Mavs have failed to qualify for the postseason the past few years, but have begun to assemble a very talented young roster, led by Dennis Smith Jr., and new draftee Luca Doncic.

We would be hard-pressed to expect Dirk to post big numbers in his final season, or even have a Kobe-type of final NBA game. But, what we can expect, is the big man to continue to knock down his jump shots. To play 75 or more games and to average double-figure scoring yet again. He has been the face of this team for 20 years now, and it’s fantastic he will get a 21st year.

The Mavs have done a good job of adding depth in the last few offseasons, and as a result, Nowitzki has lost a few minutes. He has played a lot of center, with Harrison Barnes at the power forward spot. This lineup will still be used, but likely less frequently with the addition of DeAndre Jordan. The Clippers were reluctant to play small ball and remove Jordan, and Dallas may well likely follow the same path. It’s also worth noting that he shot a career-high 58% from the free-throw line, up 10% from the previous year.

If the Mavs want to actually compete for the postseason this year, they’d limit Dirk’s minutes over the course of the year to keep him fresh down the stretch. With LeBron coming to the West and the Nuggets improving their roster, the playoff race will be daunting. It’s also hard to see any of last year’s postseason qualifiers missing out this year. They will most certainly have a chance, if Dennis Smith Jr. can take the next step in his progression, though.

Join us on Telegram to get even more free tips!
« Alex Len is Atlanta Bound
Kevin Love Inks Deal with Cleveland Cavaliers »
SportingPedia covers the latest news and predictions in the sports industry. Here you can also find extensive guides for betting on Soccer, NFL, NBA, NHL, Tennis, Horses as well as reviews of the most trusted betting sites.
NBA Betting Tips, Predictions and Odds 1385