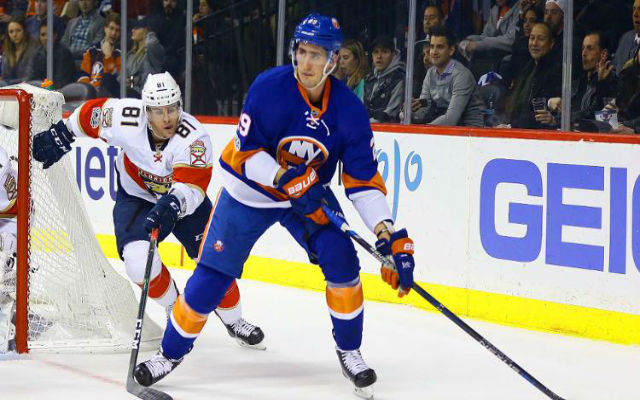 The Associated Press reported on Monday night that the New York Islanders signed Forward Brock Nelson to a one year deal worth $4.25 million.  There was an arbitration hearing scheduled for August 3rd, that the Islanders wanted to avoid, especially after the player-friendly deal reached by a Toronto committee in the case of Jacob Trouba and the Winnipeg Jets (Trouba was awarded over $5 million).

This signing came after a down season for Nelson, where he recorded a total of 35 points, on 19 goals and 16 assists.  After a short stint with the American Hockey League’s Bridgeport Sound Tigers during the 2013-14 season, he came back to the league with a vengeance in the 2014-15 season.  He set what were then his NHL career highs in goals (20) and assists (22). He then followed that with a season where he seemed to shoot first, pass second, as he scored less points (40) but set a new career high for goals, with 26.  He then followed that with a 2016-17 season that saw him yet again increase his NHL career high for points by scoring or assisting on 45. His assist numbers also went up, as he has 25 assists. Whether his down 2017-18 season was a fluke or not, the Islanders are clearly worried about something, as they only offered the 26-year-old forward a one-year deal.

The forward was taken 30th overall by the Islanders in the 2010 NHL Entry Draft but did not start playing with the organization until after the 2011-12 season.  He was a product of the University of North Dakota, where he earned a couple of accolades. During the 2011-12 season, he was named to the All-WCHA third team and was named to the All-Tournament team later that season as well.  He has also represented the United States at the World Championships since 2014, where he has recorded 28 points, and also brought home a bronze medal in 2015 (As he did in the World Junior Championships in 2011).

Nelson provides the Islanders with an imposing frame, standing at 6 foot 3 inches, and weighing in at 205 pounds.  Should his numbers return to where they have been the past few seasons before last, the Islanders will surely want to keep him around for a while.  If not, he may be looking at another team’s bench or perhaps another short AHL stint, which seemed to help him last time. He could also be shopped as a depth player to try to help the Islanders recover from the loss of star center John Tavares.  Being a left-handed shooter who has proven himself capable of providing 20+ goals per season on a low line should make him attractive to some team, if not his own.

Regardless of what role he has on the team this season, it will be interesting to see where the forward lands after becoming a free agent again after this season.  He has spent his entire NHL career with the Islanders.

Join us on Telegram to get even more free tips!
« Maple Leafs Could Add More Power, Add Artemi Panarin
Wild Keep Momentum on Their Side, Re »
SportingPedia covers the latest news and predictions in the sports industry. Here you can also find extensive guides for betting on Soccer, NFL, NBA, NHL, Tennis, Horses as well as reviews of the most trusted betting sites.
NHL Betting Tips, Predictions and Odds 800