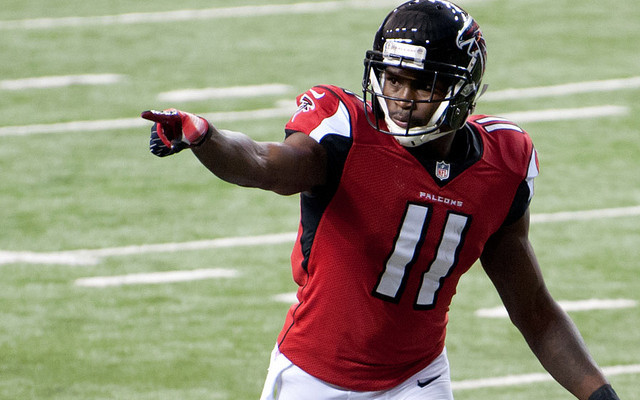 Julio Jones has absolutely no plans to report to training camp for the Atlanta Falcons. NFL.com is reporting that Jones is comfortable with sitting out the entire training camp unless he gets a new deal. Atlanta’s position is that Jones will not be getting a new deal prior to the 2018 season, but they would be willing to sit down and talk with the star wide receiver prior to the 2019 season.

Jones skipped all voluntary workouts with the team and also the mandatory minicamp so his absence from training camp is not a surprise to anyone around the team. The problem with Jones’ contract is that his guaranteed money is almost run dry and he wants more money right now. Other teams have been in similar situations, such as Antonio Brown and Rob Gronkowski where the contract is reworked to give immediate relief to the player from money they have set aside for the future. This is a possible stop-gap solution to get the wide receiver back with the team for the near future.

A few different variables may be factoring into Julio Jones decision-making process. First off, it has been reported that Jones has been working out with Terrell Owens this offseason. It is no secret that the Hall of Fame wide receiver was very outspoken about his own worth and value during his time playing in the NFL. This attitude could be rubbing off on Jones. Second, Jones sat and watched the Los Angeles Rams give Brandin Cooks a five year, $80M contract this offseason. You would be hard pressed to find any real NFL fan who believes that Cooks is a better, or more valuable, wide receiver than Jones. However, that money given to Cooks is significantly higher than what Jones is to be paid in the last three years of his deal with the Falcons. In terms of average annual value, Jones is also behind Mike Evans, Antonio Brown, Sammy Watkins, A.J. Green and Jarvis Landry.

Jones will be fined $40,000 for each day of camp he misses, which will add up quickly. With that added into the equation, it is clear that the Falcons have all the leverage in this situation. Also, Jones recently had a private workout with quarterback Matt Ryan, who told reporters that he expected Jones to be in camp. There seems to be some sort of a disconnect between the quarterback and his top target.

Julio Jones has made the Pro Bowl in the last five seasons that he has not been limited by injuries. He also has four straight seasons of at least 1,400 yards receiving. If the Falcons are forced to move forward without Jones, they will do so relying heavily on Mohamed Sanu and draft pick Calvin Ridley. Most of the receivers in camp are young and unproven, so getting Jones back in the fold should be a top priority for Falcons management. I anticipate a short-term solution between the two parties will get Jones back on the field for 2018 and then a more long-term solution will be had in the 2019 offseason.

Join us on Telegram to get even more free tips!
« Josh Gordon Not in Camp
Khalil Mack, Aaron Donald Staying Away From Football »
SportingPedia covers the latest news and predictions in the sports industry. Here you can also find extensive guides for betting on Soccer, NFL, NBA, NHL, Tennis, Horses as well as reviews of the most trusted betting sites.
NFL Betting Tips, Predictions and Odds 332