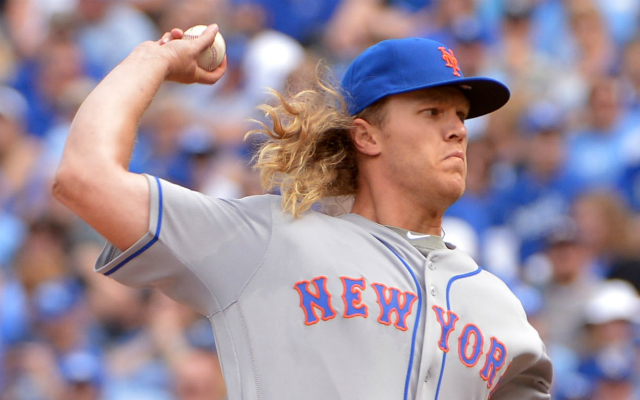 The New York Mets struggled to keep players healthy in the first half of the 2018 Major League Baseball season, and it appears that the second half will be much of the same. The Mets have seen Noah Syndergaard, Yoenis Cespedes, and minor leaguer Tim Tebow all go down with an injury this week. The injuries have knocked the Mets into last place in the National League East.

Noah Syndergaard is headed to the disabled list for one of the strangest reasons in MLB history. Syndergaard was displaying symptoms of hand, foot, and mouth disease during his start last Friday night against the Yankees. Hand, foot, and mouth disease is a viral disease that is usually contracted by children under the age of 5. It is believed that Syndergaard’s DL stay will be short, and he should miss just one start for the Mets.

Syndergaard was pulled after just five innings against the Yankees as the Mets noticed a significant drop in velocity on his fastballs. Syndergaard believes that he contracted the disease after working a baseball camp during the All-Star break. Syndergaard is a 6-1 with a 2.89 earned run average in his 13 starts for the Mets this season.

A bigger issue for the Mets is the status of slugging outfielder, Yoenis Cespedes. Cespedes has spent much of 2018 on the disabled list with a strained right hip flexor, but it appears that the situation is only getting worse for the Mets. The outfielder has been feeling pain in both of his heels, and Cespedes recent underwent an MRI and doctors are trying to determine if surgery will be required on both heels. A surgery would likely sideline Cespedes for 8-10 months.

Cespedes was activated off of the disabled list last Friday, and he hit a home run in his first game back for the Mets. Cespedes has not appeared in a game for the Mets since that game. The 32-year-old Cespedes, has dealt with the pain for the last 15 years, and the Mets were aware of this issue when they acquired him in 2015. Cespedes has played in just 38 games for the Mets in 2018.

The injury woes are not just affecting the Major League team, as a minor leaguer, Tim Tebow appears to be done for the season. Tebow has a broken hamate bone in his right hand, and the team announced that he will likely miss the remainder of the 2018 season. Tebow is expected to undergo surgery today to repair the broken bone.

There was a ton of hype surrounding Tebow’s decision to play professional baseball, but he has performed well in the minor leagues for the Mets. The former NFL quarterback was selected to play in the Eastern League All-Star game earlier this month. Tebow hit 6 home runs with a .273 batting average for Double-A Binghamton, but is still not a real threat to reach the Major League team anytime soon.  Tebow has struck out a team-high 103 times in just 83 games for Binghamton this season.

Join us on Telegram to get even more free tips!
« Poncedeleon Shines in Major League Debut
Yankees Land Zach Britton From Orioles »
SportingPedia covers the latest news and predictions in the sports industry. Here you can also find extensive guides for betting on Soccer, NFL, NBA, NHL, Tennis, Horses as well as reviews of the most trusted betting sites.
MLB Betting Tips, Predictions and Odds 241