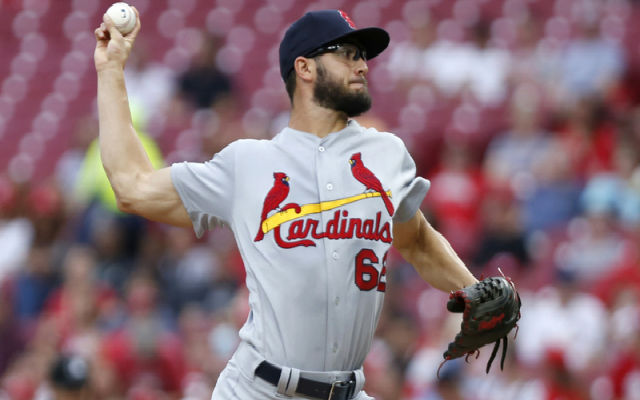 St. Louis Cardinals right hander, Daniel Poncedeleon, made his long awaited Major League debut on Monday night in Cincinnati. Poncedeleon held the Cincinnati Reds hitless through 7 innings of baseball, before being taken out due to a high number of pitches. What makes the start even more remarkable is that Poncedeleon is just 14 months removed from a severe head injury that required emergency surgery.

Poncedeleon threw 116 pitches in his first 7 innings of Major League Baseball. He left the game with a 1-0 before watching the bullpen lose the game for the Cardinals. Poncedeleon struck out three batters, and walked three batters before being lifted. Flamethrowing, Jordan Hicks, gave up the first hit of the game to Reds pinchitter, Phillip Ervin.

Poncedeleon became the fifth pitcher in since 1961 to carry a no-hitter through seven innings in his Major League debut. The Cardinals rookie had no issues with being taken out of the game despite working on a no-hitter.

The 26-year-old, Poncedeleon, was almost forced to quit baseball almost 14 months ago after he was hit in the head with a line drive while pitching for Triple-A Memphis. Poncedeleon was struck in the right temple with the liner and had to have emergency brain surgery the following day in May 2017. The St. Louis Cardinals invited the pitcher to their big league spring training camp after Poncedeleon was progressing quickly back into baseball.

This is his second stint with the St. Louis Cardinals, but Poncedeleon did not appear in any of the 3 games that he was on the roster for last month. The hard-throwing right-hander was 9-3 for Memphis this season, including a 2.15 earned run average. Poncedeleon threw a complete game one-hit shutout on July 15, the last appearance he made at Triple-A. It is unclear if Poncedeleon will make another immediate start for the St. Louis Cardinals.

Poncedeleon has a long and strange baseball journey before being drafted by the St. Louis Cardinals as a 9th round pick in 2014. He attended four different colleges, and was also drafted four different times as an amateur baseball player. Poncedeleon was drafted out of Embry-Riddle Aeronautical University, becoming the first player to reach the Majors from the division two school.

The Cardinals are currently in 4th place in the National League Central. They trail their rival, Chicago Cubs, by 8.5 games in the division, and are 5.5 games out in the Wild Card race. St. Louis will continue to take on the Cincinnati Reds on Tuesday night at Great American Ball Park.

Join us on Telegram to get even more free tips!
« Trio of American League Aces Set to Return This Week
New York Mets’ Injury Woes Continue »
SportingPedia covers the latest news and predictions in the sports industry. Here you can also find extensive guides for betting on Soccer, NFL, NBA, NHL, Tennis, Horses as well as reviews of the most trusted betting sites.
MLB Betting Tips, Predictions and Odds 241