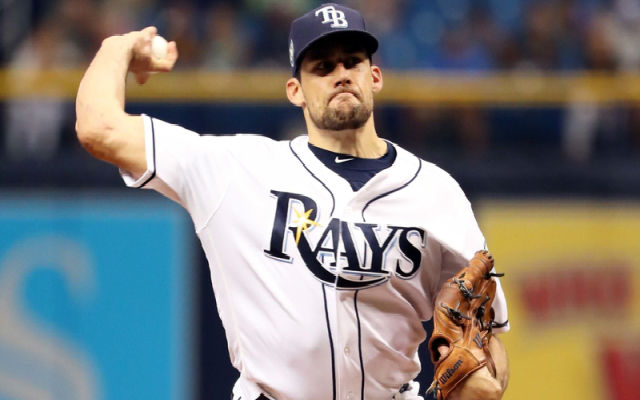 The Boston Red Sox have acquired right handed starter, Nathan Eovaldi, from the Tampa Bay Rays. In exchange for Eovaldi, Boston will send Jalen Beeks to Tampa Bay. The Red Sox made this move less than 12 hours after the New York Yankees landed reliever, Zach Britton, from the Baltimore Orioles. The Red Sox and Yankees are in a very tight battle atop the the American League East standings.

Boston Red Sox president of baseball operations, Dave Dombrowski, has a reputation of being very aggressive at the trade deadline. The Red Sox were one of the teams trying to land Britton from the Orioles, but Dombrowski turned to starting pitching help. The acquisition of the hard-throwing Eovaldi will likely force a Red Sox pitcher into the bullpen for the playoff run.

Eovaldi was scheduled to pitch against the New York Yankees on Wednesday afternoon but was scratched about two hours prior to game time. The veteran pitcher can become a free agent after the 2018 season, and was unlikely to re-sign with the Tampa Bay Rays.

The 28-year-old, Eovaldi, has already undergone two Tommy John surgeries during his baseball career. The last surgery caused Eovaldi to miss all of the 2017 season for the Rays. The righty started 2018 on the disabled list, but was activated on May 30. Eovaldi threw six no-hit innings in his first start of the season, before being removed due to a high pitch count. Eovaldi is 3-4 with a 4.26 earned run average in 10 starts with Tampa Bay this season.

The Red Sox will be sending left-handed starter, Jalen Beeks, to the Rays as compensation. Beeks was the number 15 ranked prospect in the Red Sox organization according to MLB Pipeline. Beeks was selected by the Boston Red Sox as a 12th round pick in the 2014 Major League Draft. Beeks made 16 starts for Triple-A Pawtucket this season, and had a 2.89 earned run average for the Triple-A club. Beeks made his MLB debut on June 7, taking the loss in a spot start against the Tigers.

The Rays appear to be looking toward their future, as it appears they will miss the 2018 playoffs. Tampa trails the Red Sox by 19 games in the division, and are still well back in the American League Wild Card standings. The Rays could make a few more moves before the 2018 Trade Deadline passes.

The Red Sox continue to have the best record in baseball, but have some question marks in the starting rotation. Both Eduardo Rodriguez and Steven Wright are on the disabled list for Boston and are not expected back anytime soon. When they get healthy, the addition of Eovaldi will likely push Drew Pomeranz or Brian Johnson to the bullpen.

Boston leads the New York Yankees by 5 games in the American League East. The Red Sox also hold a slight edge over the Houston Astros for the best record in baseball. Eovaldi is 2-0 in four career starts at Fenway Park. The righty should make his debut for the Red Sox later this week.

Join us on Telegram to get even more free tips!
« Yankees Land Zach Britton From Orioles
Strasburg, Bryant Headed Back to Disabled List »
SportingPedia covers the latest news and predictions in the sports industry. Here you can also find extensive guides for betting on Soccer, NFL, NBA, NHL, Tennis, Horses as well as reviews of the most trusted betting sites.
MLB Betting Tips, Predictions and Odds 241