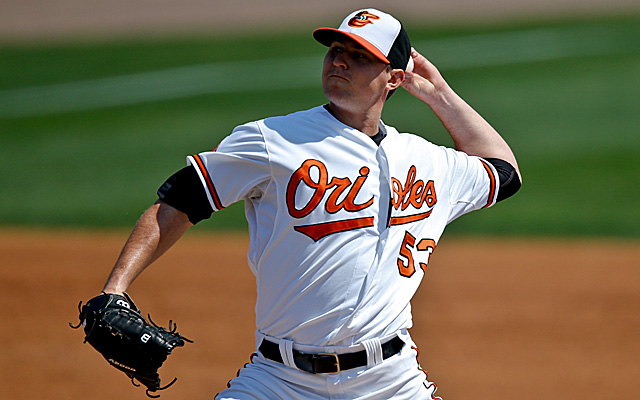 The New York Yankees were looking to add bullpen depth before the trade deadline, and they did it in a big way on Tuesday. The Yankees were able to land former All-Star, Zach Britton, from the Baltimore Orioles. The Orioles will be receiving three minor-league prospects in exchange for their closer.

The 30-year-old Britton has been the closer for the Baltimore Orioles since the 2013 season. The left-hander recorded 139 saves for Baltimore during his very solid career. Britton joins Jeurys Familia, Kelvin Herrera, and Brad Hand as a talented group of closers who have been traded during the 2018 season. The Houston Astros, Boston Red Sox, and Chicago Cubs were also highly involved in trying to land Britton.

Britton started the 2018 season on the disabled list after rupturing his Achilles tendon while working out during the offseason. Britton was activated by the Orioles on June 12 and has been solid since making his return. The hard-throwing lefty has a streak of eight straight scoreless outings. Britton will move from the worst team in Major League Baseball to a team that is in the hunt for the best record in baseball.

The Orioles selected Britton as a third-round pick in 2006, and transitioned him into the closer role. Britton has three straight seasons in which he recorded 30-plus saves with an earned run average of under 2.00. His best year came in 2016, when he recorded a save in all 47 chances and finished with a sparkling 0.54 ERA. He finished fourth in the American League Cy Young voting that season. Britton is a free agent at the end of this season.

The Orioles are entering a complete rebuild, and are in the process of trying to acquire as many top prospects as they can. Last week, the Orioles traded superstar shortstop, Manny Machado, to the Los Angeles Dodgers in exchange for prospects. Baltimore might not be done trading veteran players before next week’s trade deadline.

The right-handed starter, Dillon Tate, is the key piece that will be headed to Baltimore. Tate was the fourth overall pick in the 2015 MLB Draft, and was selected by the Texas Rangers. The Yankees were able to acquire Tate in a trade that featured Carlos Beltran a year later. Tate is ranked as the 8th best Yankees prospect as according to ESPN’s Keith Law. Tate was 5-2 with a 3.38 earned run average for Double-A Trenton this season.

The Orioles will also receive left-handed starter Josh Rogers and right-handed reliever Cody Carroll. Both pitchers were pitching at Triple-A Scranton in the Yankees organization. Carroll was drafted out of Southern Mississippi, and has made 32 relief appearances this season at Scranton. The righty was 3-0 with a 2.81 earned run average, including 9 saves at Triple-A. Rogers, a Louisville product, has made 19 starts for Scranton in 2018. The lefty was 6-8 with a 3.98 earned run average in those 19 starts at Triple-A.