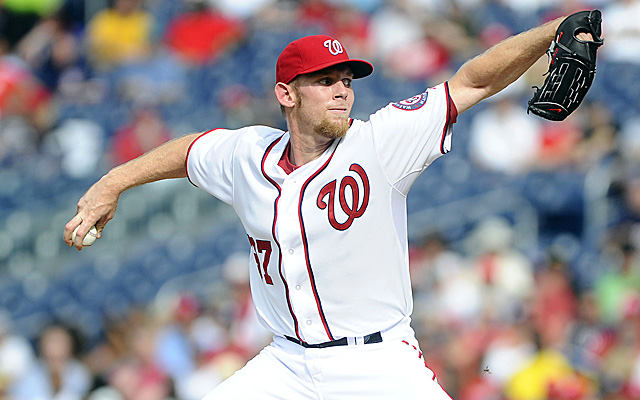 Two of the biggest stars in the National League are heading back to the disabled list for the second time this season. Stephen Strasburg and Kris Bryant both landed on the 10-day disabled list, their teams announced on Thursday. The absence of Strasburg and Bryant come just a week after the 2018 All-Star Break.

Chicago Cubs superstar, Kris Bryant, was placed on the disabled list, retroactive to July 24. The cubs recalled infielder, David Bote, to take Bryant’s place on the active roster. Bote was in the lineup at second base for the Chicago Cubs on Thursday afternoon against the Diamondbacks. This is the second stint on the disabled list for Bryant this month.

Bryant was placed on the disabled list on June 22, and wasn’t activated until July 11 for the Cubs. The former National League Most Valuable Player initially injured his right shoulder sliding into a base in last June.

Since coming off of the disabled list on July 11, Bryant started in nine games for the Cubs. Bryant is hitting just .276 with 11 homers and 44 runs batted in for the Cubs this season. The third baseman reaggravated the shoulder on a swing earlier in the week. The Cubs still lead the National League Central by 2.5 games entering Thursday. Chicago will need the services of Bryant if they are going to return to the NLCS for a fourth straight season.

The Washington Nationals placed right-handed pitcher, Stephen Strasburg, on the disabled list retroactive to July 22. Strasburg was scheduled to take the mound against the Marlins as Washington begins a series in Miami. The team announced that Strasburg has a cervical nerve impingement. The team is hoping that Strasburg will be ready to return when the 10 days have passed.

Strasburg was activated off of the disabled list last Friday, after being placed on the disabled list on June 10 with shoulder inflammation. He lasted just 4 ⅔ innings in that game, giving up six earned runs against the Atlanta Braves. After being removed from the game, Strasburg and teammate Max Scherzer were seen yelling at each other in the Nationals dugout. The scuffle required Nationals manager, Dave Martinez, to speak with both pitchers about the incident.

Injuries have plagued Strasburg throughout his Major League career. The former number 1 overall pick in 2009 underwent Tommy John surgery in September 2010. The hard-throwing right-hander has made five trips to the disabled list since signing a seven-year contract extension in 2016. Strasburg is just 6-7 with a 3.90 earned run average in 14 starts this season.

Not much has gone right for the Washington Nationals in 2018, and injuries have played a big role in their struggles. The Nationals have seen several key starters miss time this season, and closer Sean Doolittle is currently on the disabled list. The Nationals sit in third place in the National League East, trailing both the Philadelphia Phillies and Atlanta Braves.

Join us on Telegram to get even more free tips!
« Red Sox Acquire Nathan Eovaldi
Yankees Slugger Out With Injury »
SportingPedia covers the latest news and predictions in the sports industry. Here you can also find extensive guides for betting on Soccer, NFL, NBA, NHL, Tennis, Horses as well as reviews of the most trusted betting sites.
MLB Betting Tips, Predictions and Odds 241