Twitter
« Wild Keep Momentum on Their Side, Re
Rangers Ink Long Term Deal with Skjei » 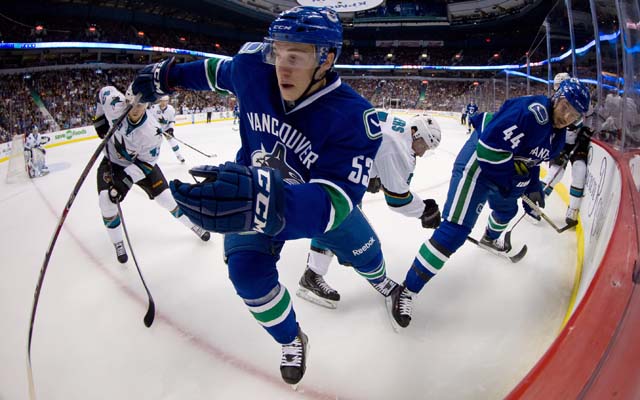 The Vancouver Canucks signed a few free agent forwards this past week.  The primary purpose of these moves appears to be to try to shore up their low line defense.  If their new defensive forwards can force more takeaways, it will create more scoring opportunities, and maybe even some odd-man rushes.  The three forwards they signed were Jay Beagle, Tim Schaller, and Antoine Roussel.  Let’s take a look at each signing:

Beagle was given a 4 year, $12 million contract.  Despite going undrafted, he worked his way up to an NHL roster.  The 32-year-old had a couple short stints with the Capitals during the 2008-09 and 2009-10 seasons, but became a regular starting in the 2010-11 season.  He has played for them until this offseason. Beagle had a bit of a recession during this past season scoring-wise. During the 2016-17 season, he set his NHL career high for points, with 30 (13 goals, 17 assists).  During the 2017-18 season, he recorded only 22 on 7 goals and 15 assists. However, he did leave an impact by setting his NHL playoff high for points with 8. He will play a key role on the Canuck team that will rely so heavily on young talent, as he was voted as the best penalty killer by The Hockey News in 2018.

Another former undrafted free agent, Schaller had established himself as a consistent depth player for Boston after leaving Buffalo to get there.  Vancouver gave him a 2 year, $3.8 million deal. The New England native is a Providence College product, from which he graduated before going undrafted and signing with the Buffalo Organization.  Vancouver will be the first team he plays for that is not in New England, in fact it is over 3100 miles away from Boston, the team which he is moving from.

The Canucks will surely look to make sure they help him adjust to the new city, as they will expect him to be as fierce and gritty on the ice as he has been his entire career.  His job will be, like Beagle’s, to protect the young, skilled players, and to play good defense. He will also likely be expected to kill penalties more often than not. Schaller just came off of a season where he set his NHL career high in points, with 22. Any amount of scoring he can provide while also playing his defensive role will surely help the Canucks attempt to still win games without the recently departed Sedin brothers.

Roussel is a, by most accounts, great pick up by Vancouver.  They signed him to a 4 year, $12 million contract. Roussel is less a skilled defender and more of an agitator, attempting to get into the other teams’ heads as much as possible.  He amassed over 800 penalty minutes just in his tenure with the Stars, which began in the midst of the 2012-13 season. He also never scored less than 25 points in an NHL season in which he played the majority of the games until last season.  Vancouver is surely betting on him to rebound back to his former self, and also to mess with the players on the opposing side.

These players have three things in common: They all went undrafted, they all have been established role players for teams for at least a couple years, and they all have the faith of the Canucks’ management that they will help the Canucks continue their tradition of winning.

Join us on Telegram to get even more free tips!
« Wild Keep Momentum on Their Side, Re
Rangers Ink Long Term Deal with Skjei »
SportingPedia covers the latest news and predictions in the sports industry. Here you can also find extensive guides for betting on Soccer, NFL, NBA, NHL, Tennis, Horses as well as reviews of the most trusted betting sites.
NHL Betting Tips, Predictions and Odds 800