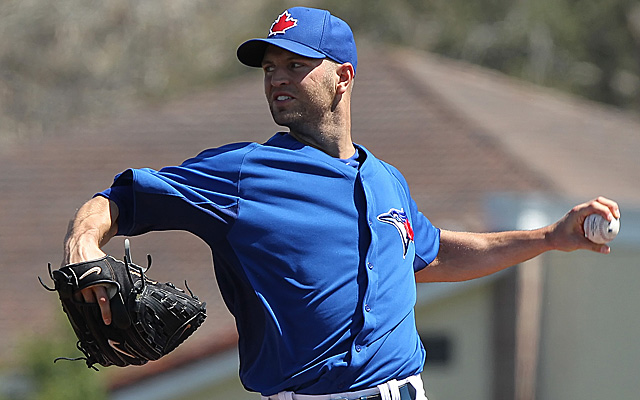 The New York Yankees continue to improve their postseason chances before the 2018 Trade Deadline. On Thursday, the Yankees acquired left-handed pitcher, J.A. Happ from the Toronto Blue Jays in exchange for a pair of minor-leaguers. The Yankees landed closer, Zach Britton, from the Baltimore Orioles earlier in the week, but were actively looking for starting pitching depth.

Happ was named to the American League All-Star team this season for the first time in his long career. The lefty has made 20 starts for the Bluejays in 2018, and is 10-6 with a 4.18 earned run average. Happ has been particularly good against the Boston Red Sox in his career, posting a 7-4 record and a 2.98 earned run average in 19 starts against them. The veteran has a 0.84 ERA against the high scoring Red Sox offense this season. The Yankees are in a tight battle with the Red Sox for the American League East title.

Happ is a 12 year veteran, and will provide the Yankees with some much needed playoff experience in their rotation. The Yankees will be the 6th team that Happ has pitched for, joining the Phillies, Astros, Mariners, Pirates, and Blue Jays. He has a career record of 102-82 and a 3.95 earned run average. Happ was a member of the 2008 Philadelphia Phillies team that won the World Series.

The Blue Jays will be getting a pair of minor-leaguers in return for Happ. Infielder, Brandon Drury, and outfielder Billy McKinney will head north to Canada to join the Blue Jays organization. Drury had a brief stint with the New York Yankees earlier this season, and McKinney was the 20th rated prospect in the Yankees organization. Both players will have a shot of playing with the big league club in Toronto.

Drury made seven starts for the Yankees earlier this season, and can play multiple defensive positions. Drury suffered migraines and blurred vision during his stint with the Yankees and was put on the disabled list. With the emergence of Gleyber Torres in New York, Drury was sent back to Triple-A upon being healthy. He is batting just .176 in 18 career Major League games.

The 23 year old McKinney is no stranger to being traded in his professional career. The slugging outfielder was selected by the Oakland Athletics as the 24th pick in the 2013 draft. McKinney was then dealt to the Chicago Cubs as part of the Addison Russell deal in 2014. The Cubs included McKinney in a package with Torres to acquire Aroldis Chapman from the Yankees. McKinney made his Major League debut with New York earlier this season. McKinney has hit 13 home runs in 62 games this season in the minor leagues.

The Yankees continue to hit home runs at a historic rate, but the addition of Happ gives the team a better shot to win a postseason series. Happ will join veterans CC Sabathia and Masahiro Tanaka in the middle of the Yankees rotation. Young Luis Severino has taken over the ace role for the Yankees. New York trails Boston by 5 game entering action on Thursday.

Join us on Telegram to get even more free tips!
« Khalil Mack, Aaron Donald Staying Away From Football
Five Madden 19 Team Rankings EA Sports Got Wrong »
SportingPedia covers the latest news and predictions in the sports industry. Here you can also find extensive guides for betting on Soccer, NFL, NBA, NHL, Tennis, Horses as well as reviews of the most trusted betting sites.
NFL Betting Tips, Predictions and Odds 332