Yankees Slugger Out With Injury 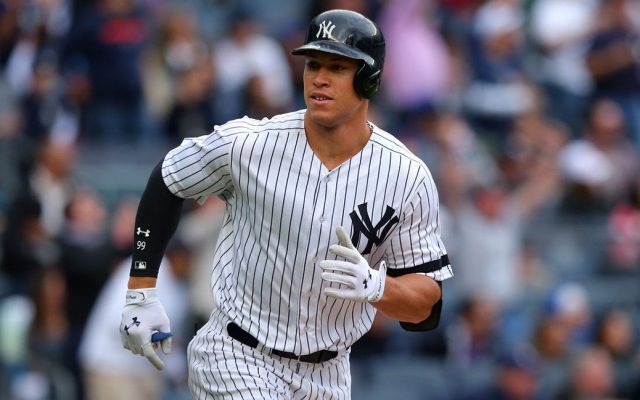 New York Yankees outfielder, Aaron Judge, was injured during the first inning in the Yankees 7-2 win over the Kansas City Royals on Thursday. Judge suffered a chip fracture in his right wrist after being hit by a pitch thrown by Jakob Junis. The 93 mile per hour fastball rose up and in to Judge, who failed to get out of the way of the pitch.

Judge was in clear pain after getting hit, slamming his bat and elbow pad to the ground. Upon reaching first base, Judge was looked at by Yankees trainer, Steve Donohue, but stayed in the game at that time. The slugger took another at-bat in the game, reaching safely on an infield single in the third inning. Judge was removed from the game before his at-bat in the 4th inning, and was replaced by Miguel Andujar.

Judge was taken to New York Presbyterian Hospital where he underwent an MRI and CT scan. This followed an immediate examination of the right wrist at Yankee Stadium. The team announced that surgery will not be required on the wrist, but Judge will be unable to swing a bat for a minimum of three weeks. Judge’s injury is a huge blow to the Yankees, who are trying to catch the Boston Red Sox in the AL East standings.

Judge is hitting .285 for the Yankees, one year after finishing second in the American League MVP voting during his rookie season. The slugger leads the Yankees with 26 homers and is tied with teammate Giancarlo Stanton with 61 runs batted in for the team lead. Judge has done a ton of damage at Yankee Stadium this season, hitting .375 with 18 home runs and 44 runs batted in.

The Yankees trail the Boston Red Sox by 4 ½ games in the AL East, after the Red Sox lost on Thursday night. Judge will miss the Yankees four-game series against the Red Sox in early August in Boston. The Yankees and Red Sox will square off six times in the final month of the season, with Judge scheduled to return by then. The Yankees could look to make a trade to bring in a slugger to replace Judge’s production in their lineup.

Judge wasn’t the only Yankees player who was forced to leave Thursday’s game early against the Royals. Right-handed starter, Sonny Gray, was forced to exit after being hit on the pitching hand by a hard hit ground ball. It is unclear if Gray will be forced to miss anytime, but was scheduled to undergo an X-Ray when the technician returned to Yankee Stadium. Gray is 8-7 with a 5.08 earned run average for the Yankees this season.

Earlier this week, catcher Gary Sanchez, was placed on the disabled list after re-injuring his groin in a game against the Tampa Bay Rays. Sanchez lack of hustle on two key plays in that game played a decisive role in a close loss to the Rays.

Join us on Telegram to get even more free tips!
« Strasburg, Bryant Headed Back to Disabled List
Cubs Complete Trade For Hamels »
SportingPedia covers the latest news and predictions in the sports industry. Here you can also find extensive guides for betting on Soccer, NFL, NBA, NHL, Tennis, Horses as well as reviews of the most trusted betting sites.
MLB Betting Tips, Predictions and Odds 241