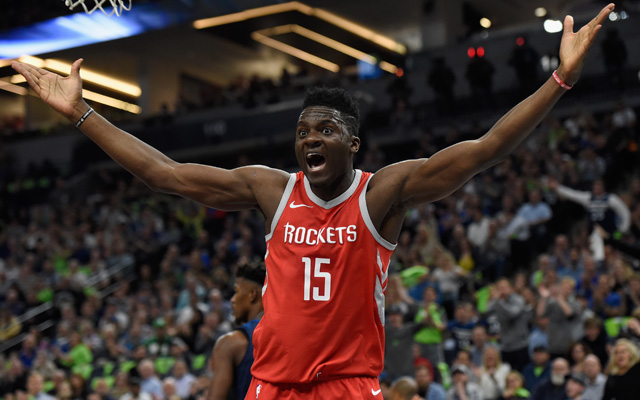 HE. IS. BACK. Finally, about a month into free agency, the Houston Rockets have come to their senses and re-signed Clint Capela. The big man will be making $18 million a year over the next five years. They have their big guy to toss lobs to.

As many basketball fans saw last year, the impact of Clint Capela is seen in a lot more places than just the box score. It gives the Rockets a big man to throw lobs to, somebody to crash the offensive boards and an elite rim protector on the defensive end of the floor. In his two years as a full-time starter since the departure of Dwight Howard, his numbers have increased impressively, putting him in the league as a top-10 big man.

It’s hard to find a center who can protect the rim these days, especially as many teams have tried playing full-time small ball. Houston was very lucky to have a guy like Capela fall to them with the 24th pick in the 2014 Draft. They were also lucky to have a big man like Dwight Howard in place as the starter when this selection was made, who can get the job done both on the floor, and off it as a mentor for the Swiss big man.

There should be no mistaking that the price was right that Houston paid Capela. There were talks of him wanting to get a max contract, which would mean giving him an equivalent contract to what Rudy Gobert got from Utah, and what Steven Adams got from OKC. Though the tax bill will be extremely high next year, they still saved a lot of money by paying him only $18 mil a year, and only $16 mil a year guaranteed.

The Rockets defensive identity ended with Capela. They had Chris Paul leading the guards, PJ Tucker and Trevor Ariza leading the perimeter scheme, while Capela was always that last line of defense at the rim. For a big man, he is also very versatile and able to switch without issue. That is something you really can’t teach, but something that the player just has to continue to work at. Similar to how we saw Kevin Love lock down Stephen Curry late in game 7 of the 2016 NBA Finals, Capela can defend similarly against a guard outside the arc.

A big year is coming for Capela in the first year of his new contract, as the Rockets will be playing in a Western conference which is somehow a lot tougher than it was last year. Within a single game of the NBA Finals, the Rockets are hungry for more. In addition to having to defeat the Warriors (WHO ADDED BOOGIE COUSINS), they have a healthy Thunder team, LeBron’s Lakers, and an even better Utah team.

It’s certainly doable for them to win the west, but Capela will have to step up.

Join us on Telegram to get even more free tips!
« Carmelo Anthony With New Scenery; Lands in Houston
Hodgepodge of NBA Free Agency Signings »
SportingPedia covers the latest news and predictions in the sports industry. Here you can also find extensive guides for betting on Soccer, NFL, NBA, NHL, Tennis, Horses as well as reviews of the most trusted betting sites.
NBA Betting Tips, Predictions and Odds 1379