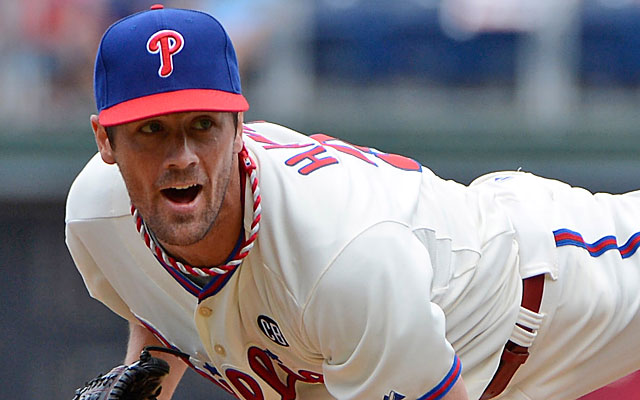 The Chicago Cubs made a move to improve their starting rotation by acquiring veteran left-hander, Cole Hamels. The Cubs will send two minor-league pitchers and a player to be named later to the Rangers. Texas will also send cash considerations to the Cubs as part of the deal that was announced on Friday.

The Cubs missed out on another trade target, J.A. Happ, when the New York Yankees made a trade to acquire the Toronto Blue Jays pitcher. Chicago turned their attention to Hamels and were able to get the deal done. Hamels should join the team sometime this weekend, but it is unknown when he will make his Cubs debut. The lefty was scheduled to pitch on Saturday for the Rangers.

The 34-year-old Hamels has struggled for the Rangers in 2018, but the Cubs hope that a change of scenery will help turn his season around. Hamels is just 5-9 with a 4.72 earned run average with Texas, but most of those struggles came in the hitter-friendly ballpark in Arlington. His earned run average is a respectable 2.93 on the road this season.

The former Philadelphia Phillies ace, Hamels has made it to the All-Star Game four times in his illustrious career. The lefty has a career record of 152-111 with a solid 3.43 career earned run average. He was a member of the Philadelphia Phillies from 2006-2015, and won a World Series with the team in 2008. Hamels was named Most Valuable Player of both the National League Championship and World Series that season. The Phillies defeated Cubs’ manager, Joe Maddon’s, former team in the World Series in 2008.

Hamels has pitched well in his career at Wrigley Field. He has made six starts with a 3-1 record and a sparkling 1.74 earned run average. In his final start as a Philadelphia Phillie, Hamels threw a no-hitter against the Cubs at Wrigley Field in July 2015.

Texas will receive right-handers, Eddie Butler and Rollie Lacy, to go along with a player to be named later. Butler has made 8 appearances for the Cubs this season and is 1-1 with a 4.08 ERA in those appearances. Butler appeared in Thursday’s 7-6 win over the Arizona Diamondbacks. Lacy, 23, is 5-2 with a 2.45 earned run average in 18 appearances at two separate levels in the Cubs organization. He was most recently pitching for the Cubs High-A team, Myrtle Beach Pelicans.

Hamels is expected to slide into the Cubs rotation in place of either Mike Montgomery or Tyler Chatwood. Chatwood has struggled in his first season with the Cubs, giving up 85 walks in 94 innings. The right-hander gave up 6 walks in the Cubs win on Thursday.

Join us on Telegram to get even more free tips!
« Yankees Slugger Out With Injury
Phillies and Diamondbacks Make Acquisitions »
SportingPedia covers the latest news and predictions in the sports industry. Here you can also find extensive guides for betting on Soccer, NFL, NBA, NHL, Tennis, Horses as well as reviews of the most trusted betting sites.
MLB Betting Tips, Predictions and Odds 241