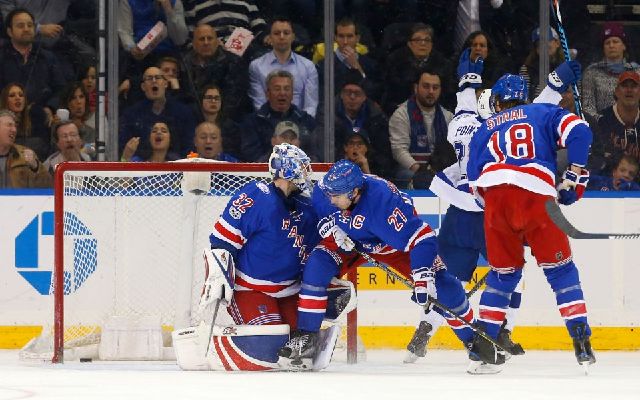 The New York Rangers announced on Saturday that Brady Skjei would be returning to the lineup.  He was given a six-year, $31.5 million contract.

Skjei has been an absolute metronome of consistency for New York, is the only Ranger to play in all 82 games during the 2017-18 season.  He also has been getting things done offensively for the team. Albeit a small sample size, last year the young Skjei set his career high for points, with 39.  He doesn’t score a lot of goals, but the budding defenseman did have 34 assists that year. While this past year didn’t exactly look the same way, he still did well.  He recorded 25 points while playing the aforementioned entire 82 game season. Obviously the Rangers have faith that he will continue to improve as an everyday blueliner for their team.  He has recently been paired with Kevin Shattenkirk, who is a New York native, who was signed last season after being traded from the Blues to the Capitals.

Skjei also displays great, unchanging discipline, especially for a younger player.  During the 80 games he played this past season, he only had to serve 39 penalty minutes (That is an average of about 0.24 penalties per game, or about 1 penalty every 4 games).  Exhibiting these types of traits like being able to regularly defend and recover from minor mistakes without committing avoidable penalties is very encouraging for a player his age.  He certainly seems to have the potential to be an extremely reliable, possibly even an all-star, defensemen. The Rangers certainly seem to think so, despite the fact that he was minus-27 during his sophomore season (As opposed to his plus-11 rookie year).

He has not had a hat trick yet in his career, but he did have a multi-goal game in the 2017 Stanley Cup Playoffs against the Senators.  He even made the All-Rookie team for the 2016-2017 season. Skjei has also been representing the United States’ Senior men’s hockey team for the past two World Championships.  During these championships, he has a goal in one (2016), and an assist in the other (2017) en route to a 4th place and then a 5th place finish. He also only committed one penalty during his 13 games, further speaking to his discipline.

It will be interesting to see what the outcome of this contract is.  A long-term contract given to a young player seems to lead to either a long career with that particular team or a trade.  If he continues to contribute throughout the next few years, the team may decide to commit to keeping him a fixture in their organization.  They might also decide to trade him in exchange for some picks or some different young players. Regardless of what happens with this contract, most hockey fans could agree that Skjei is one of the more promising defensemen in the National Hockey League, and he will be an entertaining player to watch throughout his career.

Join us on Telegram to get even more free tips!
« Canucks Add Depth to Fill Sedin Void
Just How Good Was William Karlsson Last Season? »
SportingPedia covers the latest news and predictions in the sports industry. Here you can also find extensive guides for betting on Soccer, NFL, NBA, NHL, Tennis, Horses as well as reviews of the most trusted betting sites.
NHL Betting Tips, Predictions and Odds 800