Carson Wentz Aiming for Week One 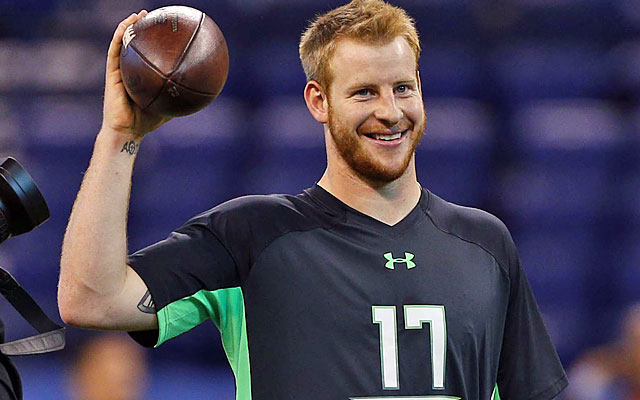 The Philadelphia Eagles have quite the unique situation in training camp this year. They are coming off of a Super Bowl victory where they beat the vaunted New England dynasty led by perhaps the greatest quarterback of all time in Tom Brady. Now they are preparing to make a run at a repeat of the memorable 2017 season, but no one knows quite what to make of their current quarterback situation.

Carson Wentz was in the midst of an MVP caliber season last year before he went down with his season-ending knee injury. The Eagles offense looked unstoppable under new coach Doug Pederson so when Wentz went down, so did many Eagles’ fans Super Bowl aspirations. In behind center came University of Arizona product Nick Foles, a journeyman in much of his short NFL career. The Eagles won the Super Bowl because of Nick Foles, not despite having Foles at quarterback. In other words, Foles made some high level plays throughout the playoffs to get the Eagles to where they are today.

Foles has become something of a folk hero around Philadelphia because of his play, the Super Bowl run, and simply the fact that the experts had written the Eagles off when it became apparent that Foles was the guy for the rest of the season. Now as the 2018 season opens in less than a month, high profile draft pick Wentz appears to be ahead of schedule in his return to the huddle. Make no mistake about it, this is Carson Wentz’s team if he his healthy and 100% ready to go. The season he was having last season placed him solidly in the elite quarterback conversation across the league.

Foles seems to understand his role on this team and the Eagles are certainly happy with Foles as their insurance policy for Wentz’s knee. Wentz was only starting to show what kind of player he could be and now he is not only going to be facing the pressure of the 2017 Super Bowl season, but also he will also have some internal demons to face. Returning from such a catastrophic injury is never easy. Remember Carson Palmer talking about seeing “ghosts” around his injured knee for at least a full year after his return from a similar injury? It is human nature for a player to be hesitant about exposing that leg upon their return. Unfortunately for Wentz, it was his “damn the torpedos” attitude and style that made his so scary in the open field. Time will only tell if Wentz is able to find that magic again.

The Eagles are set to make their 2018 debut on September 6, 2018 vs. the Atlanta Falcons. At this point, all signs are pointing to Wentz being on the field. No matter when Wentz finally takes the field, he will be under a microscope. One thing is for certain, you want to get a talent like Wentz back on the field as soon as possible, but if he is not ready to go on September 6, you can guarantee that the Philly legend Nick Foles will be ready.

Join us on Telegram to get even more free tips!
« Cardinals Make Flurry of Roster Moves
Bills Not Closer to Starting QB Clarity »
SportingPedia covers the latest news and predictions in the sports industry. Here you can also find extensive guides for betting on Soccer, NFL, NBA, NHL, Tennis, Horses as well as reviews of the most trusted betting sites.
NFL Betting Tips, Predictions and Odds 332