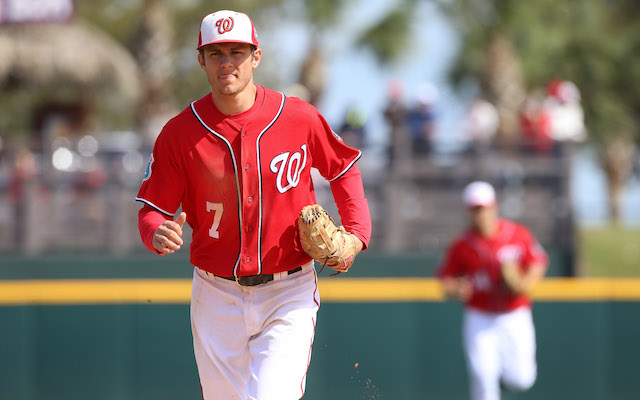 A pair of Major League Baseball players are facing controversy after some of their old tweets resurfaced on Sunday afternoon. The Atlanta Braves, Sean Newcomb, and Trea Turner of the Washington Nationals both had to answer about their past tweets on Sunday. Newcomb and Turner join Brewers pitcher, Josh Hader, in the latest twitter controversy. Major League Baseball has not yet handed down punishment to the two players.

Sean Newcomb appeared to be having a great Sunday going, pitching the best game of his career. Newcomb held the high powered Los Angeles Dodgers hitless through 8 ⅔ innings. Chris Taylor broke up the no-hit bid with two strikes, and two out in the ninth inning. The Braves went on to beat the Dodgers, 4-1 behind Newcomb’s dominant performance.

Newcomb, 25, had to spend his time with the media talking about past tweets instead of talking about his great game on the mound. The tweets that resurfaced on Sunday were sent out by Newcomb in 2011 and 2012 when he was still in high school. Several of the tweets included gay slurs, while a specific tweet had racial undertones. Newcomb, quickly apologized for the tweets, but the damage was already done.

Newcomb will be forced to meet with Billy Bean, Major League Baseball’s Vice President for social responsibility and inclusion. Newcomb became aware of the old tweets after the game when he saw a news report. The left hander pitcher asked the media to return to the clubhouse so he could address the report immediately following the game.

Newcomb is having a solid season for the Atlanta Braves with a 10-5 record. He sports a 3.23 earned run average in 21 starts this season. The Braves trail the Philadelphia Phillies by 1.5 games in the National League East.

Washington Nationals shortstop, Trea Turner, also had some offensive tweets resurface on Sunday night. The tweets, which were posted in 2011-12, contained gay slurs and anti-gay comments. Major League Baseball had not addressed Turner’s tweets as of Monday morning.

Turner did not address the tweets with the media, but he did issue a statement and an apology on Sunday night. Nationals general manager, Mike Rizzo, called the tweets “inexcusable,” but pointed to the kind of person that Turner has been since joining the Nationals. Turner broke into the league in 2016, finishing second in the Rookie of the Year voting that season. Turner is hitting .265 with 13 homers for the Nationals this season.

Things have not gone well for the Nationals in 2018, and this is just another example. The Nationals were projected to win the NL East, but are stuck in third place, six games behind the Phillies. Injuries have piled up for the team, who might be “sellers” before the 2018 Trade Deadline passes. The Nationals lost to the Miami Marlins, 5-0 on Sunday, dropping them below the .500 mark for the season. Washington will host the New York Mets on Tuesday night.

Join us on Telegram to get even more free tips!
« MLB Hall of Fame Induction Takes Place Sunday
Astros Acquire Osuna »
SportingPedia covers the latest news and predictions in the sports industry. Here you can also find extensive guides for betting on Soccer, NFL, NBA, NHL, Tennis, Horses as well as reviews of the most trusted betting sites.
MLB Betting Tips, Predictions and Odds 241