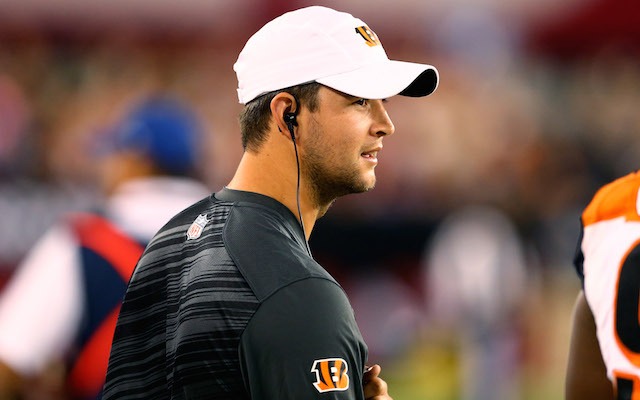 The Buffalo Bills moved on from incumbent quarterback Tyrod Taylor following the veteran quarterback leading the franchise out of their long playoff drought. The 2017 Buffalo Bills were a team focused on protecting the ball and playing solid defense. Along with some key wins in big spots, the Bills were helped by an absolutely abysmal division last year. Shortly after the season ended, it became clear that the team wanted to get younger and more dynamic at the quarterback position and that all started with shipping Taylor to Cleveland to become their starting quarterback.

Now heading into the 2018 season, the Bills have three quarterbacks vying to become the opening day starter in 2018. Those guys are Josh Allen, drafted in the first round out of the University of Wyoming, AJ McCarron who has come over after backing up Andy Dalton in Cincinnati the past few years, and the lone holdover from last year’s roster, Nathan Petermann, a second-year guy out of the University of Pittsburgh.

On paper, one would think that McCarron would have the early advantage due to his experience in the league and success he has had in a small sample size. However, reports out of Buffalo are that the former Crimson Tide national champion is having difficulty picking up the play book.  Peterman has been the most impressive in camp, but Bills fans may be concerned if this is their guy right at the outset. Petermann was absolutely atrocious in his lone start of the season after the Bills inexplicably sent Taylor to the bench and Petermann had trouble throwing it to the correct team. That leaves rookie draft pick Josh Allen fighting for snaps in camp. It is no secret that I do not think Allen is anything close to an NFL caliber starter at this point in his career. His struggles against WAC defenses should be very alarming because, well, he is not going to be playing against WAC defenses anymore.

This is one of the most intriguing camp battles for any team across the NFL but it is also a somewhat self-destructing process.. The Bills are trying to find their #1 guy, their #2 and also their #3. As of right now, they do not seem any closer to figuring that out then they were right after Allen got his name called. The three quarterbacks are rotating snaps, which inevitably means that none of the three guys are getting enough snaps. This will take its toll on whoever comes out the victor, as the Bills offensive line and wide receiver corps are both shaky units. The lead guy will need plenty of reps with these units to develop chemistry and comfort.

In the end, I think that McCarron wins the job out of camp, simply because I think they want him to win the job out of camp. If Petermann is the guy in Week 1, Bills fans will have legit questions as to why they traded the farm in order to acquire Allen, when the two are similar in age and NFL experience. If Petermann is the guy, it may say more about Allen and McCarron than it actually does of Petermann’s potential. However, lets take a deep breath and see how it plays out. Will Bills fans have that same patience after tasting playoff football?.

Join us on Telegram to get even more free tips!
« Carson Wentz Aiming for Week One
Stefon Diggs Cashes In »
SportingPedia covers the latest news and predictions in the sports industry. Here you can also find extensive guides for betting on Soccer, NFL, NBA, NHL, Tennis, Horses as well as reviews of the most trusted betting sites.
NFL Betting Tips, Predictions and Odds 332