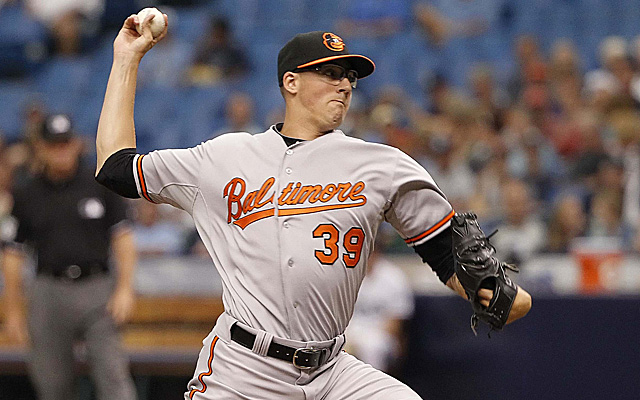 The Baltimore Orioles are sending ⅖ of their starting rotation to the Atlanta Braves in exchange for four Minor-League prospects. Right handed starters, Kevin Gausman and Darren O’Day will be headed to the National League and will help the Braves in the present and the future. The Orioles added four more potential pieces to their future, which has been the goal for the last several weeks. The Orioles will also receive international slot money from the Braves to complete the deal.

Veteran Kevin Gausman is the main part of this deal for the Atlanta Braves. The 27-year-old is 5-8 with a 4.43 earned run average for the Orioles this season. Gausman has been hurt by a lack of run support, and by the fact that he is pitching in the tough American League East Division. He is under contract with eligibility for arbitration through the 2020 season.

The 35-year old veteran, Darren O’Day, will not factor in the playoff race this season but will be under contract through the 2019 season. O’Day had season-ending surgery on his left hamstring but should return for the start of 2019. He made 20 appearances before his injury and sported a 3.60 ERA this season. The 11-year veteran has a career 2.56 earned run average and could pitch in either role for the Braves next season.

Catching prospect Brett Cumberland is another solid prospect that will be headed to Baltimore as part of this deal. Cumberland was ranked as the 30th best prospect in the Braves organization and is currently at Double-A Mississippi. The Braves selected the 23-year-old in the second round of the 2016 MLB Draft. He has hit 11 homers to go along with a .228 batting average this season.

Right-hander Evan Phillips will also be heading to Baltimore in this deal. Phillips made his Major League debut this season but has struggled in his four appearances with the Braves. The 23-year-old has dominated at Triple-A Gwinnett, posting 1.99 ERA in 31 appearances out of the bullpen. The 23-year-old lefty, Bruce Zimmerman is the final prospect included in this trade. He is 9-4 with a 2.86 ERA at two different levels within the Braves organization.

This is the second trade between the Braves and Orioles in the last week. Baltimore sent righty, Brad Brach to Atlanta for international slot money earlier in the week. The Braves are just one-half game out in the National League Wild Card, and are going all in for a chance at the 2018 playoffs. The Braves host the Miami Marlins on Tuesday night.

Join us on Telegram to get even more free tips!
« Indians, Diamondbacks Make Deadline Deals
Pirates Land Archer in Blockbuster Deal »
SportingPedia covers the latest news and predictions in the sports industry. Here you can also find extensive guides for betting on Soccer, NFL, NBA, NHL, Tennis, Horses as well as reviews of the most trusted betting sites.
MLB Betting Tips, Predictions and Odds 241