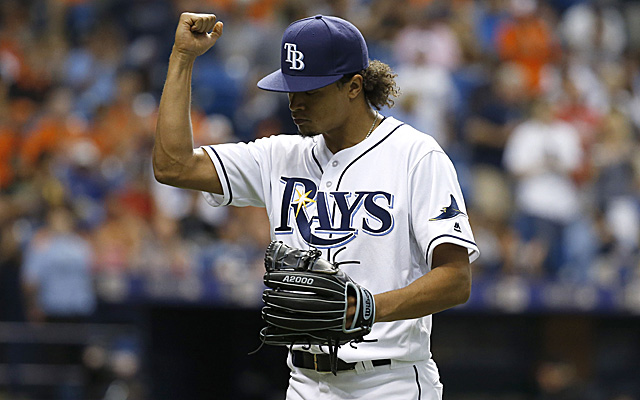 The Pittsburgh Pirates were the winner in the Chris Archer sweepstakes, acquiring the righty from Tampa Bay ahead of the MLB Trade Deadline. The Pirates will send outfielder Austin Meadows and right-hander Tyler Glasnow to the Rays in exchange for the ace. The Rays will also receive a player to be named later to complete the deal.

There has been speculation regarding Archer’s future in Tampa Bay for years, and the Pirates were finally able to put together a package to get him Pittsburgh. The acquisition of Archer is a huge boost to the playoff chances of the suddenly surging Pirates. The Pirates are just 3.5 games out of the second Wild Card spot in the National League.

Archer is just 22-36 in the last three seasons for Tampa Bay to go along with a 4.10 earned run average, but his stuff is considered some of the top in baseball. The righty has finished in the top 3 in the American League strikeout race each season. He is 3-5 with a 4.31 ERA in 17 starts this season for the Rays. A move from the American League East to the National League Central should also help improve these numbers.

While the addition of Archer makes the Pirates better this season, it will also make them stronger in the future. Archer will be under team control next season and has team options for 2020 and 2021 seasons. The 29-year-old is due to make just 7.5 million dollars next season, which is very cheap for a frontline starter. Archer will join a talented starting rotation of Jameson Taillon, Joe Musgrove, and Trevor Williams. All of those pitchers are 26 and younger, and Archer will provide veteran leadership for that group.

The Tampa Bay Rays added two more very solid prospects to build around in the future. Outfielder Austin Meadows was a first-round draft pick of the Pirates in the 2013 MLB Draft. He made his Major League debut on May 17 for the Pirates and has been solid at the plate for them. Meadows is hitting .292 with five homers and 49 runs batted in for Pittsburgh since his debut.

Glasnow, 24, has struggled at the Major League level but was dominant throughout his Minor League career. The hard-throwing right-hander made 13 starts for the Pirates in 2017 but wasn’t very effective. He went just 2-7 with a 7.69 earned run average during his rookie campaign. After being moved to the bullpen in 2018, he is 1-2 with a 4.34 ERA in 34 appearances. It is unclear what role Glasnow will have in Tampa Bay.

This was the second big acquisition made by the Pirates this week. On Monday, Pittsburgh acquired Rangers closer Keone Kela for left-handed pitching prospect Taylor Hearn. The Pirates appeared to be “sellers,” but a recent 15-4 run has them right back in the playoff race. Pittsburgh will play host to division-leading, Chicago Cubs, on Tuesday night.

Join us on Telegram to get even more free tips!
« Braves, Orioles Complete Mega Deal
Yankees Rotation in Flux »
SportingPedia covers the latest news and predictions in the sports industry. Here you can also find extensive guides for betting on Soccer, NFL, NBA, NHL, Tennis, Horses as well as reviews of the most trusted betting sites.
MLB Betting Tips, Predictions and Odds 241