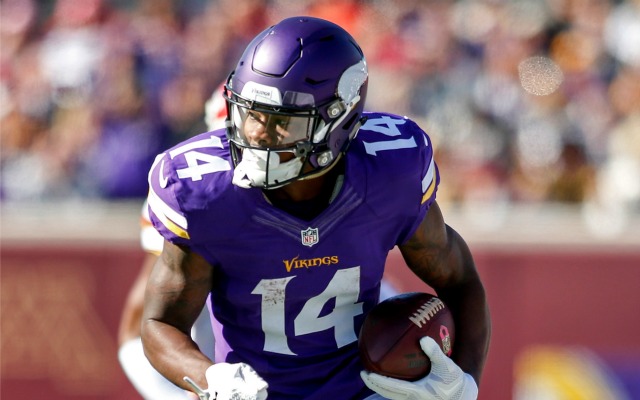 Minnesota Vikings wide receiver Stefon Diggs became the most recent receiver in the league to cash in. The Vikings gave Diggs a five year extension worth $72M. The deal guarantees Diggs $40M and can reach as high as $82M if the receiver reaches certain incentives in the deal. I wonder if any of those incentives include catching 61-yard touchdowns to win playoff games against the New Orleans Saints?

That seems to be quite a bit of money for a guy who has never topped 1,000 yards in his career. However, the time was ripe for Diggs to cash in since the receiver market has absolutely exploded. Just looking at the deals that Jarvis Landry, Brandin Cooks, Mike Evans, and DeAndre Hopkins have signed recently, it was only a matter of time before someone looked at Diggs with those same misty eyes. The Vikings preempted those open market fears by resigning him on their own before he has a chance to test the open market.

The Vikings have set themselves up very nicely in the near future. They saw the 2017 core, a core that took them to within a game of the Super Bowl, as something they want to keep together. In the past calendar year, Minnesota has locked up Everson Griffin, Linval Joseph, Xavier Rhodes, Danielle Hunter, Eric Kendricks and now Stefon Diggs. If that trend continues, you would not think that Adam Thielen and Anthony Barr are too far behind. Management in Minnesota is making one thing clear to their roster: if you perform on a high level and help this team in the post season, we will try to extend your stay in the purple and yellow.

Diggs has made his desire to stay in Minnesota very well known. His connection to the organization is a cerebral one, in the mold of “these guys actually took a chance on me.” Diggs is also in a position to see an uptick in his production since the team has brought in noted gunslinger Kirk Cousins. Looking at the numbers, the only reason Diggs did not put elite statistics on the board the past two seasons were a series of nagging injuries. Diggs expects to be at full strength when the season opens for the Vikings in 2018.

Sure, Diggs is a guy that you have to know where he is on the field. However, he is now paid like a guy that you have to scheme your whole defense around. I do not think that he is or will ever be that guy. Thielen and Diggs seem to play off of each other well though and that tandem could give defensive coordinators headaches as long as they remain on the field together. Clearly, the message coming out of Minnesota is that they expect to win and they expect to win right now. They better win now when these players are at their peak. Any fall off will make these long-term signings possible albatrosses that cannot be moved off of the payroll. For the time being, the favorites in the NFC North should be happy. They got their quarterback, they are hungry, and they are being paid.

Join us on Telegram to get even more free tips!
« Bills Not Closer to Starting QB Clarity
Packers’ Ryan, Patriots’ Matthews Suffer Injuries »
SportingPedia covers the latest news and predictions in the sports industry. Here you can also find extensive guides for betting on Soccer, NFL, NBA, NHL, Tennis, Horses as well as reviews of the most trusted betting sites.
NFL Betting Tips, Predictions and Odds 332