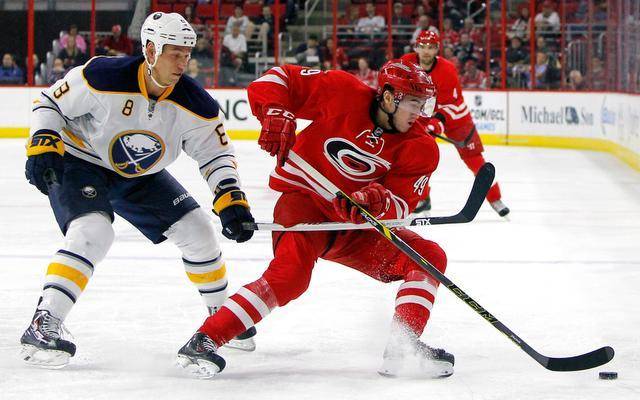 The Buffalo Sabres knew they had to do something after trading forward Ryan O’Reilly to St. Louis in July. To offset the scoring loss that losing O’Reilly, they acquired star forward Jeff Skinner from the Carolina Hurricanes. In getting him, they gave up young forward Cliff Pu, a 2019 second-round draft pick and their third-round and sixth-round picks in the 2020 draft. Seemingly one-sided, the Sabres now have a star forward to pair with Jack Eichel on their top line.

This trade is very interesting because of the fact that Jeff Skinner had a no-trade clause. This means that he had to choose which team he would be willing to be traded to. The forward grew up in Toronto, and it is likely that Buffalo was the closest team to home that was willing to make such a deal (As exciting as a Skinner to Maple Leafs trade would have been). He will be a mere two hours from his hometown in Buffalo.

Cliff Pu, they only player currently packing his bags and moving to Raleigh, is a 20 year old forward selected 69th overall back in the 2016 NHL draft by Buffalo, but he has been playing in the OHL lately. This is seemingly mostly due to his youth. In the OHL, he has been nothing short of dominant. In 2016-17, Pu put up 86 points for the London Knights. The next year, a season during which he was traded to the Kingston Frontenacs, he scored 84. He certainly has been putting up numbers that give the impression he has the potential to be a contributor at the NHL level.

Hurricanes General Manager Don Waddell underlined the necessity for a rebuild in North Carolina. He made this clear when he began seeking teams to trade Skinner to after missing the playoffs yet again, for the ninth straight season. Regarding the trade, he had this to say, as reported by USA Today: “I think we felt cultural that we needed to make some changes,” Waddell said. “This was the right time for us to move on and provide Jeff with a fresh start in Buffalo.”

Buffalo has been seeing a lot of change lately, which should be setting them up for an exciting season. First, they had the number one pick in this past draft, which they used on defenseman Rasmus Dahlin. It is expected that he will make an immediate impact, and has tremendous upside. They also, in trading O’Reilly to St. Louis, acquired some quality pieces in Tage Thompson, Patrik Berglund, and Vladimir Sobotka. They also added forward Conor Sheary from the Penguins.

A shoot-first, pass second forward, Skinner has scored around 20-30 goals in most of his 8 seasons in the league. In 2016-2017, he scored 37 goals and matched his career high for points, which he sat during his rookie campaign, of 63 points. He has 204 career goals, making him one of the most accomplished scorers at his age. He certainly has the potential to fit in well with the young, exciting Sabre team. This trade should make this coming NHL season even more exciting.

Join us on Telegram to get even more free tips!
« Spooner Agrees to New Deal with Rangers
Could Artemi Panarin Return to Chicago? »
SportingPedia covers the latest news and predictions in the sports industry. Here you can also find extensive guides for betting on Soccer, NFL, NBA, NHL, Tennis, Horses as well as reviews of the most trusted betting sites.
NHL Betting Tips, Predictions and Odds 800