Trout Out, Harper Playing On Sunday 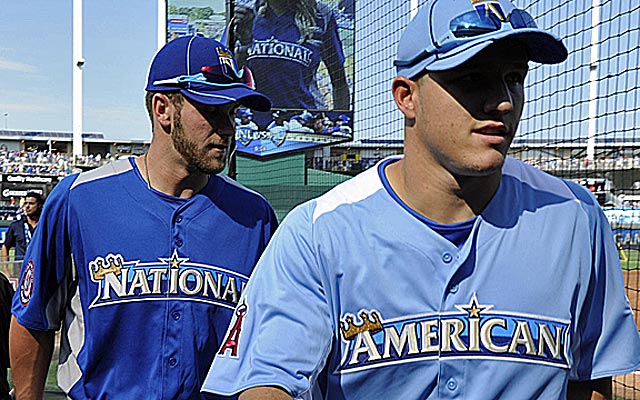 A pair of superstar outfielders are both dealing with injuries as the calendar has shifted to August. Los Angeles Angels star, Mike Trout, is dealing with a wrist injury that will keep him out of the lineup on Sunday. Meanwhile, Bryce Harper will suit up for the Washington Nationals a day after getting hit by a pitch.

Mike Trout will be missing his fourth straight game on Sunday, after injuring his right wrist on a slide in Wednesday’s game against Tampa Bay. The injury doesn’t appear to be serious, but the nagging pain has kept Trout out of the lineup since that game.

X-Rays and an MRI revealed inflammation in the right wrist, but Trout was expected to make a quick return to the lineup. The right wrist has not responded to treatment as quickly as Trout or the Angels would have liked. Trout will turn 27 on Tuesday and is listed as day to day by the Angels. The Angels will begin a three-game series in Detroit on Monday.

Trout is having the best season of his career, and is considered a frontrunner to win the 2018 American League Most Valuable Player Award. Trout was the AL MVP in both 2014 and 2016, and is looking to become a three-time winner. Through his first 109 games, Trout is hitting .309 with 30 home runs to lead the team. Eric Young Jr. will replace Trout in centerfield for the Angels on Sunday afternoon.

Washington Nationals’ superstar, Bryce Harper will suit up on Sunday after getting hit in the kneecap with a pitch on Saturday night. Harper was hit by a curveball thrown by Reds pitcher Austin Brice is the 6th inning of the Nationals 6-2 victory. Harper initially stayed in the game, but was removed after limping in the outfield in the 7th inning. The Nationals were optimistic that Harper could suit up Sunday, and after testing the knee it appears that he was feeling better.

After Harper left the game, tensions got high between the Nationals and Reds. Joey Votto was drilled by a pitch in the eighth inning, which was the second time Votto was hit in the game. The first baseman made a gesture towards Nationals pitcher Ryan Madson as he made his way towards first base. Benches did not clear at any point, but home plate umpire Andy Fletcher issued a warning to both teams. It will be interesting to see if there is any carryover into Sunday’s series finale between the two teams.

The return of Harper is a huge boost to the Nationals chances on Sunday. The former National League MVP is having a great start to the second half of the 2018 season. Harper is hitting .359 with three homers and 13 runs batted in since the All-Star Break. The slugger was the winner of the T-Mobile Home Run Derby, which has propelled him to this hot start. The Nationals trail the Phillies by 6 games in the NL East race entering Sunday.

Join us on Telegram to get even more free tips!
« Cubs Close To Adding Pitching Depth
Nationals Trade Kelley, Sign Holland »
SportingPedia covers the latest news and predictions in the sports industry. Here you can also find extensive guides for betting on Soccer, NFL, NBA, NHL, Tennis, Horses as well as reviews of the most trusted betting sites.
MLB Betting Tips, Predictions and Odds 241