Twitter
« Could Artemi Panarin Return to Chicago?
A Look at the Legacy of Stan Mikita » 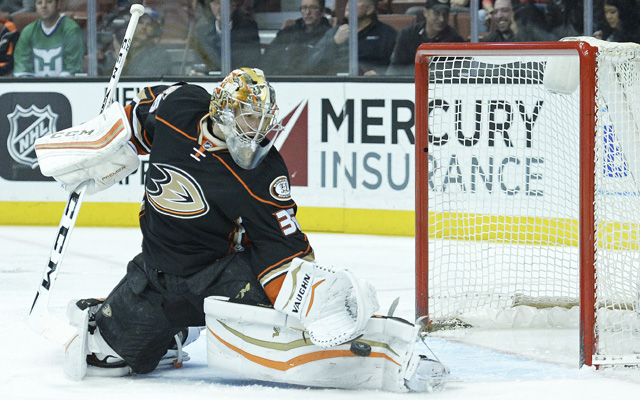 The Anaheim Ducks made a huge decision last week, when they gave John Gibson the wedding gift of a lifetime, a huge contract.  His massive 8 year, $51.2 million extension will have him on the roster through the 2026-27 season (It was signed on the day of his wedding).  It is widely regarded as a good decision for a team that has been playoff contenders every year for some time now.

The American began his career with the organization playing for the Norfolk Admirals, appearing in one game in the 2012-2013 season.  The next season saw him go 21-17, also for the Admirals. He was called up that same year, 2013-2014, and appeared in three games for Anaheim, winning all three of them.  He went 13-8 for the Ducks the season after, before being called back down to Norfolk, where he went 6-3. Gibson began the 2015-16 season playing for the San Diego Gulls, where his record was 7-4.  For many players, all the bouncing around can get into their head and affect their play once they reach the highest level again (Particularly being called back down more than once). However, that does not seem to have been the case for Gibson, as he went on to post three great seasons for Anaheim since then.

He has gone 77-47 since then. He also posted 3 straight sub-2.50 goals against seasons as well, going 2.07, 2.22, and 2.43 respectively. His career save percentage for a goalie that has played at least 150 games is the highest since the 1950s. His career .923 percentage would have made most teams jump at the chance to ink him for a long term deal, since he has shown himself to be so consistently good.  Anaheim certainly did.

The Ducks have never quite been able to break through since their recent contention began.  The 2011 playoffs saw them drop the conference quarterfinals to the Nashville Predators. They followed that up by not making the 2012 playoffs.  In 2013, they were beaten in the same round in 7 games by the Detroit Red Wings, who would go on to lose to Chicago in the next round, also in 7 games.  They finally broke through the first round in 2014, beating the wild card Dallas Stars in 6, before being dispatched by the eventual champion Los Angeles Kings, also in 7 games.

They started out strong in 2015, sweeping Winnipeg and nearly sweeping the Flames, but lost to the eventual champion Chicago (Also in 7 games) in a heartbreaking series that has been regarded as one of the best ever.  They were then beaten in the first round (As was Chicago) the next season by the Predators. The 2017 season saw them finally break through another invisible wall, and make it to the Conference finals and also finally win a game 7 over the Oilers.  However, the Conference finals would be as far as they went, as they lost there to the Predators again. This past season, they were swept in the first round by the Sharks.

The Ducks stand right now as a team that is perfectly capable of winning, but needs consistent goaltending along with offensive playmaking to finally break through in the Stanley Cup Playoffs.  They certainly shored up the first part of that on Saturday.

Join us on Telegram to get even more free tips!
« Could Artemi Panarin Return to Chicago?
A Look at the Legacy of Stan Mikita »
SportingPedia covers the latest news and predictions in the sports industry. Here you can also find extensive guides for betting on Soccer, NFL, NBA, NHL, Tennis, Horses as well as reviews of the most trusted betting sites.
NHL Betting Tips, Predictions and Odds 798