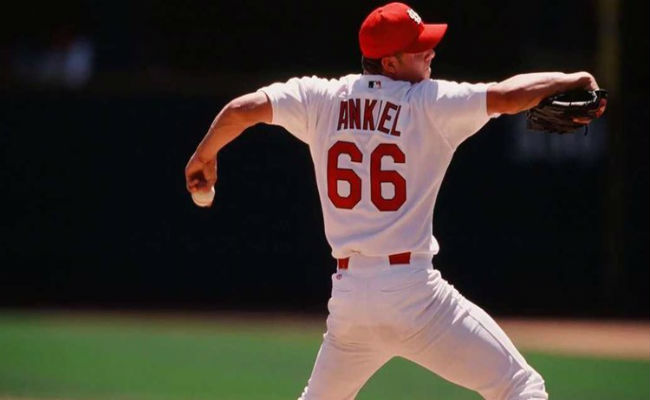 Former Major League Baseball pitcher and outfielder, Rick Ankiel has announced his plan to make a comeback in 2019. The former St. Louis Cardinals star made these plans official as part of the Fox Sports Midwest broadcast of the Cardinals–Marlins game on Monday night. Ankiel plans to return to baseball as a reliever.

Ankiel last played in the Major Leagues in 2013, but hasn’t pitched in the big leagues since the 2004 season with St. Louis. Ankiel was once a prized arm in the St. Louis organization, but a case of the “yips” derailed his professional pitching career.

Ankiel was the runner up for the National League Rookie of the Year award in 2000 for the Cardinals. He finished the regular season with a 11-7 record to go along with a 3.50 earned run average in his 31 appearances that season. Ankiel was tabbed as the game 1 starter in the NLDS that season, but things went sideways in a hurry for the lefthander. He threw five wild pitches in one inning of that game, and threw five more wild pitches in game 1 of the NLCS against the Mets that season. Ankiel finished the 2000 postseason with 11 walks in just four innings pitched.

Ankiel has spent a large part of his retirement working with young players who suffer through the same ailments as he had. He has been pitching regularly with the young players, and started to get the idea of a comeback during this time.

The 39 year old got a taste of live pitching when he appeared as a reliever in the Bluegrass World Series in Lexington, Kentucky. Ankiel was a part of a team of former Major League players who were facing off against a team of college stars. He came into the game and struck out the only batter he faced with a high fastball. Ankiel’s fastball topped out at 89 miles per hour in that game, which is well below what he was throwing before he retired.

It is unclear if Ankiel will be given an invitation to a spring training camp next February, but Major League teams will likely keep an eye on his comeback attempt. Ankiel is the first player since Babe Ruth to win at least 10 Major League Baseball games while also hitting at least 50 home runs.

Join us on Telegram to get even more free tips!
« Nationals Trade Kelley, Sign Holland
Bartolo Colon Sets Record For Latin American Pitcher »
SportingPedia covers the latest news and predictions in the sports industry. Here you can also find extensive guides for betting on Soccer, NFL, NBA, NHL, Tennis, Horses as well as reviews of the most trusted betting sites.
MLB Betting Tips, Predictions and Odds 241