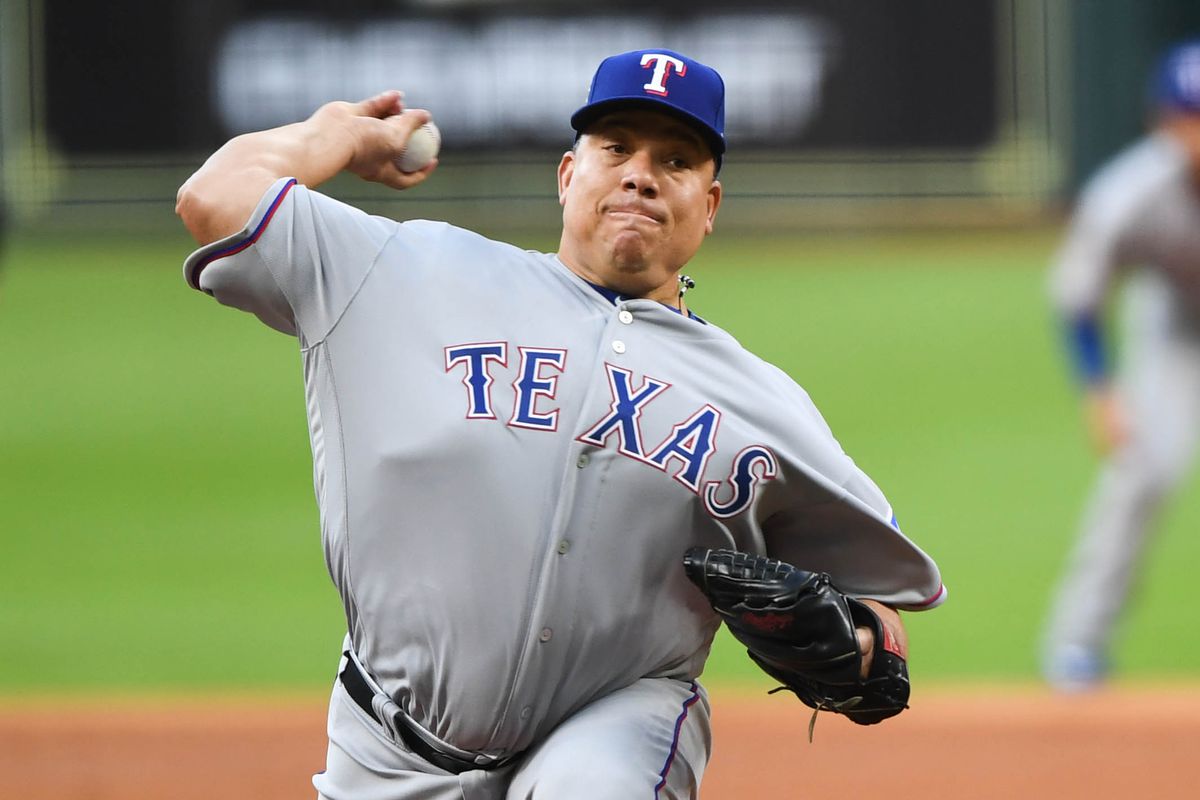 On Tuesday night, journeyman Bartolo Colon became the winningest pitcher born in Latin America with a victory over the Seattle Mariners. The win was the 246th victory of Colon’s career, passing Dennis Martinez for the most victories by a Latin-born pitcher. Martinez, who hailed from Nicaragua, earned 245 victories during his heralded career.

On Tuesday night, Colon was able to limit the high powered Mariners offense while pitching seven innings to earn the win. Colon recorded the final out in the seventh inning when he snared a comeback line drive to secure the victory for the Rangers. This was the sixth attempt at the record for Colon, who earned his first victory since June 30, against the Chicago White Sox. Colon retired nine of the final ten batters he faced on Tuesday night.

The 45 year old right hander gave up back to back homers to Nelson Cruz and Kyle Seager in the second inning on Tuesday night, putting the Rangers in a 2-0 deficit. The Rangers offense stormed back with Jurickson Profar, Adrian Beltre, and Rougned Odor each hitting homers in support of Colon. The Rangers were also aided by two errors by Mariners third baseman, Kyle Seager, in the victory.

Colon has struggled with the Rangers in 2018, and is 6-10 with a whopping 5.18 earned run average in 21 starts this season. Colon has a career record of 246-186 to go along with a career 4.08 earned run average. During his career, the Dominican Republic product has racked up 38 complete games. Colon is in his 20th season in the Major Leagues.

Colon has had to change the way he pitches since the beginning of his long career. He used to rely on an electric fastball, but now relies on great command and a large arsenal of pitches to stymie hitters. Colon will now set his sights on another record, trying to surpass Juan Marichal for most innings pitched by a Dominican Republic pitcher. Marichal threw 3,507 innings during his career. After Tuesday’s outing, Colon has thrown 3,445 ⅔ innings, putting him just over 50 innings behind the Hall of Famer. Earlier this season, Colon passed Marichal’s 243 victories for the most wins by a pitcher from the Dominican Republic.

Bartolo Colon made his Major League Debut with the Cleveland Indians in 1997 as a 24-year old hurler. He was named to the American League All-Star team in 1998, when he posted a 14-9 record to go along with a 3.71 earned run average. He was a member of the Cleveland Indians until the 2002 season.

The veteran has pitched for 11 teams during his long career, and has earned a victory for each of the teams he has pitched for. His best season came in 2005 with the Anaheim Angels, when he won the American League Cy Young Award. He is a four-time All-Star, most recently with the New York Mets in 2015.

Join us on Telegram to get even more free tips!
« Rick Ankiel Looking to Return to Major League Baseball
Mariners Pitching Woes Continue »
SportingPedia covers the latest news and predictions in the sports industry. Here you can also find extensive guides for betting on Soccer, NFL, NBA, NHL, Tennis, Horses as well as reviews of the most trusted betting sites.
MLB Betting Tips, Predictions and Odds 241