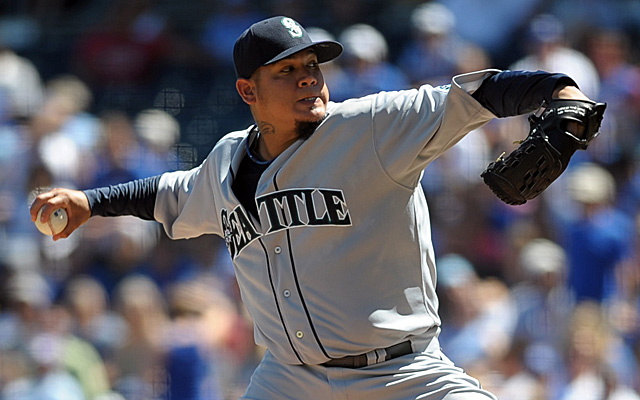 The Seattle Mariners pitching staff is failing them at the worst possible time. Seattle gave up 11 runs in the last two games against the last place Texas Rangers, knocking them further back in the playoff race. It appears that the Mariners will be without reliever Sam Tuivailala for an extended period of time, and may be without starter Felix Hernandez for the foreseeable future as well. The Mariners might be forced to take the struggling Hernandez out of the starting rotation until he can fix his issues.

Newly acquired Sam Tuivailala strained his achilles tendon in Wednesday’s loss to the Texas Rangers. Tuivailala was injured as he was trying to chase down Rougned Odor in a rundown situation between third and home. After tossing the ball to catcher Mike Zunino, Tuivailala fell to the ground and was unable to leave the field under his own power.

The Mariners acquired Tuivailala in a trade with the St. Louis Cardinals that was completed on July 27. The right hander has been solid for the Mariners since the trade, allowing just one run in 5 ⅓ innings pitched. The veteran has a combined earned run average of 3.41 in 36 games with the Cardinals and Mariners. The status of Tuivailala going forward is unknown.

Perhaps a bigger issue for the Mariners is the performance of Felix Hernandez. Hernandez gave up a career high 11 runs on Tuesday night through six innings of work. A pair of Kyle Seager errors made four of the runs unearned for Hernandez, but it was clear that “King Felix” had little answer for the Rangers. He threw just 90 pitches, giving up 8 hits, four walks, and one hit batter in the loss.

With the bad outing on Tuesday, Hernandez fell to just 8-10 on the season. The 14-year veteran has a whopping earned run average of 5.73. His next start is scheduled for Sunday against the Astros, but manager Scott Servais might decide to remove Hernandez from the rotation before that game. The Mariners have Erasmo Ramirez ready to be activated off of the disabled list this week, after throwing four Minor-League rehab starts.

Hernandez was the ace of the Mariners staff for much of his successful career. His 5.73 earned run average in the worst of his career, and he has been even worse of late. He has a 7.85 ERA over his last 6 starts, and the Mariners can not afford to lose any more ground in the AL Wild Card race. Seattle has lost 17 of their last 26 games to fall 2.5 games behind the Oakland Athletics.

“King Felix” saw lefty James Paxton take over the role of ace earlier this season, but no one expected Hernandez to be this ineffective. The 32-year-old has made six American League All-Star teams, and was widely considered one of the best pitchers in baseball for a large part of his career. The 2010 American League Cy Young Award winner has won 168 games during his fourteen-year career, which is the most by a Venezuelan-born pitcher. The Mariners will announce their plan later in the week.

Join us on Telegram to get even more free tips!
« Bartolo Colon Sets Record For Latin American Pitcher
Houston Winning Despite Slew of Injuries »
SportingPedia covers the latest news and predictions in the sports industry. Here you can also find extensive guides for betting on Soccer, NFL, NBA, NHL, Tennis, Horses as well as reviews of the most trusted betting sites.
MLB Betting Tips, Predictions and Odds 241