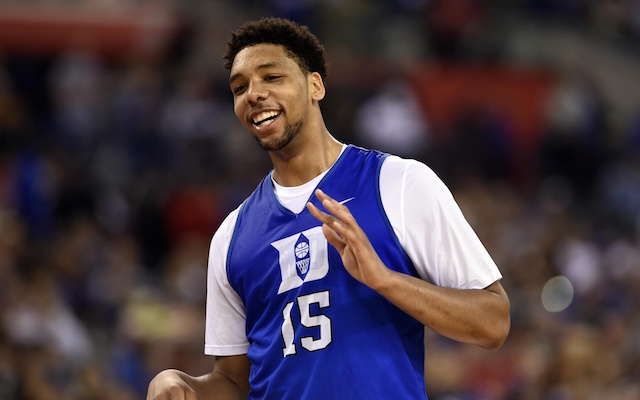 As teams start to finish filling out their rosters, the second and third tier players are starting to get contracts. A surprising signing came from the Pelicans yesterday, as they took former Brooklyn Nets center Jahlil Okafor from the free agency lot, with a partially guaranteed two-year deal. Read below as we talk about his career to date.

Drafted surprisingly high, Okafor was selected with the #3 pick by the Philadelphia 76ers in the 2015 NBA Draft. After a standout year at Duke, it was not a surprise that he ended up going so high. Once he got to the league, things worked out well for him in that first season, well, on the floor. He got in a fight with a fan in Boston before he ever played his first game.

Okafor averaged 17.5 points, 7.0 rebounds, and 1.2 blocks per game on 51% shooting during his rookie season, starting 48 games of the 53 he played in. He was an All-Rookie selection, but nothing was guaranteed with Nerlens Noel AND Joel Embiid both making a comeback. Two of these three players could never share the court together, and Okafor was mostly just an offensive player, so he started to lose touches. He was on the block during that second year.

Well, the team kept him in 2016-17, and he posted 11.8 points and 4.8 rebounds per game, most of minutes coming as a result of Joel Embiid’s re-injury. His minutes dropped from 30 to 22, and all of his stats fell too. His 2017-18 season in Philadelphia is one that everybody would like to forget.

After appearing in just 25 minutes over two games in the first month, he was shipped to Brooklyn along with Nik Stauskas. A former #3 pick, traded during his third season, from a team he really didn’t seem to be getting along with. While in Brooklyn, Okafor hardly did much. In 26 appearances off the bench, he averaged 6 points and 3 rebounds per game. He averaged just 13 minutes per night in his time there, and really just did not fit in from the start. He needed a month after being dealt to get into “game-shape”.

Now that he’s signed on with the Pelicans, there are no guarantees that he is going to get his opportunity. The Pelicans will likely be starting Anthony Davis at center on opening night, as DeMarcus Cousins bolted in free agency. They’ve got Julius Randle and Nikola Mirotic also taking minutes at the 4 and 5 spots. They’ve still got Emeka Okafor under contract, as well as young big man, Cheick Diallo.

The rotation of guys behind Davis is unclear, but Okafor is going to have to work his tail off to try and earn minutes. He can give them some offense off the bench, but the team will be like a turnstile down low with him guarding the rim. Best of luck in New Orleans, Jahlil.

Join us on Telegram to get even more free tips!
« Greg Monroe Adds New Team; Signs with Raptors
Cleveland Cavaliers With Interesting Offseason »
SportingPedia covers the latest news and predictions in the sports industry. Here you can also find extensive guides for betting on Soccer, NFL, NBA, NHL, Tennis, Horses as well as reviews of the most trusted betting sites.
NBA Betting Tips, Predictions and Odds 1371