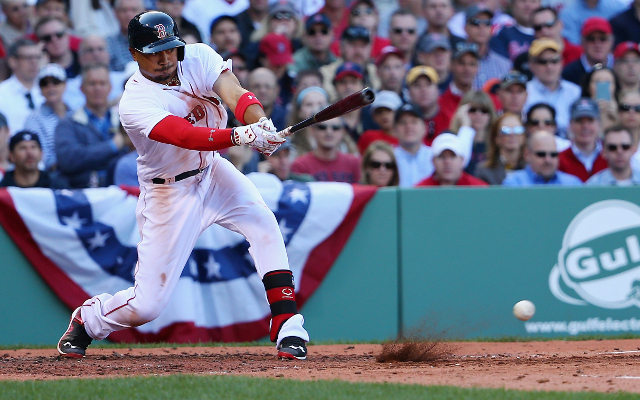 Boston Red Sox outfielder Mookie Betts became the first Major League Baseball player to hit for the cycle in 2018 on Thursday night. Betts completed the cycle by hitting a home run in the 9th inning of the Red Sox 8-5 loss to the Toronto Blue Jays. Betts has flirted with a cycle many times in his young career but was finally able to accomplish the feat on Thursday. He has previously finished just one hit away from completing the cycle eight times in his career.

Betts appeared on his way to a cycle after his first three at-bats of the game. He led off the game for the Boston Red Sox by delivering a single to get his night started. In the second inning, Betts ripped a triple, arguably the hardest part of hitting for the cycle. In his third at-bat of the game, the outfielder clubbed a double to move within a homer of completing the cycle.

In his fourth at-bat of the night, Betts drew a walk but was still guaranteed another at-bat in the game. He came up in the ninth inning facing Ken Giles of the Blue Jays. After working a 3-1 count, Betts fouled off a fastball to run the count full. He clubbed the next pitch for a no-doubt home run and celebrated his blast by raising his fist and cracking a smile. His Boston teammates were waiting to mob him upon his return to the Red Sox dugout.

With the big night, Betts continued to make his case for American League Most Valuable Player. His 4 for 4 night raised his American League-leading batting average to .347. He also has 59 runs batted in and a 1.102 OPS on the season. His biggest competition for MVP might be his teammate J.D. Martinez. Martinez blasted his AL-leading 35th homer in the loss on Thursday night.

Unfortunately for the Red Sox, the performance by Betts came in a losing effort. The loss snapped a six-game winning streak for Boston, who still has the best record in baseball at 81-35. Boston starter Rick Porcello struggled for the second straight start against the Blue Jays, giving up seven runs on six hits in four innings of work. Porcello (14-5) suffered his first lost since the Blue Jays beat him on July 13. The right-hander is 1-2 with a 9.15 ERA in four starts against the Toronto Blue Jays this season.

Boston will travel to Baltimore to take on the last place Orioles on Friday night.

Join us on Telegram to get even more free tips!
« Houston Winning Despite Slew of Injuries
Dodgers, Brewers Both Losing Relievers To Injury »
SportingPedia covers the latest news and predictions in the sports industry. Here you can also find extensive guides for betting on Soccer, NFL, NBA, NHL, Tennis, Horses as well as reviews of the most trusted betting sites.
MLB Betting Tips, Predictions and Odds 241