Derrius Guice Out for Season 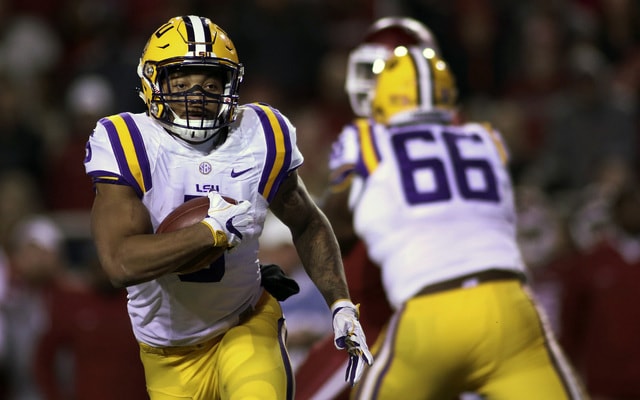 Washington Redskins second-round draft pick Derrius Guice is out for the season after tearing his ACL in the first quarter of Thursday night’s preseason game against the New England Patriots. This is a crushing blow to the Redskins, who looked to lean more on the running game this season with Alex Smith at quarterback instead of Kirk Cousins.

Guice looked to lead a backfield quarter of him, Chris Thompson Samaje Perine, and Rob Kelley, but now the familiar trio from last season will look to return to familiar roles. There were rumors that either Kelley or Perine could be on the way out in Washington, but this injury seems to ensure that the three other backs will remain on the roster. The Redskins will look to Perine and Kelley to bruise the interior of other team’s lines, while Thompson will continue his role as the scat-back, getting a few carries and being used primarily as a receiver out of the backfield.

Guice was endearing himself to the Washington fan base in training camp so this is a major let down to a crowd needing something to get excited about. It is arguable that Guice’s rookie presence at camp brought the most excitement to a Washington training camp since Robert Griffin III was drafted out of Baylor. The LSU product gained quite a reputation for a poor character and off-the-field concerns while in college, but sources claim that Guice came into camp more focused and mature than they had ever seen him. His character was the only concern any teams had on Guice, because his on-the-field talent was never in question. On draft night, Washington was ecstatic to land this talent in the second round, because many had Guice ranked as the second best running back in the draft, based on talent alone.

The news today is particularly devastating for Washington because it did not seem season-ending during or after the game last night. Many surrounding the Redskins believed that Guice had suffered an MCL or ACL sprain, but nothing as serious as what the MRI proved today. Guice suffered an injury while at LSU in the same knee that cost him a game, but it is not believed that the injuries are related. ACL tears are largely isolated incidents that are not the result of stress from previous injuries. However, it has to be concerning for the Redskins that his left knee will once again be costing him meaningful games, whether in college or the NFL.

Washington could choose to stand pat with the running back trio mentioned earlier. However, there are some interesting names that are currently unemployed that could draw interest. Former Redskin Alfred Morris, Eddie Lacy, Adrian Peterson, Jamaal Charles, and DeMarco Murray currently are all currently without a team. It remains to be seen if the Redskins will have any interest in adding to the position at all, but the fact that the Redskins may have to dip into this pool is a prime example of how things can change quickly overnight in the NFL.

Join us on Telegram to get even more free tips!
« Rookies Shine in Preseason Debuts
Friday Preseason News and Notes »
SportingPedia covers the latest news and predictions in the sports industry. Here you can also find extensive guides for betting on Soccer, NFL, NBA, NHL, Tennis, Horses as well as reviews of the most trusted betting sites.
NFL Betting Tips, Predictions and Odds 332