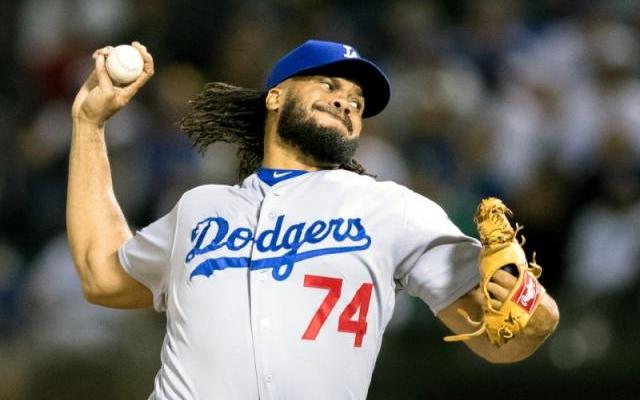 The Los Angeles Dodgers and Milwaukee Brewers are both in heated playoff races this season, and now both will be without a key reliever for a stretch of time. The Dodgers will be without All-Star closer Kenley Jansen, while the Brewers will be without veteran reliever Joakim Soria. Both of these injuries will have a significant impact on the NL West and NL Wild Card races.

The Dodgers were forced to place their closer, Jansen, on the 10-day disabled list on Friday after Jansen was hospitalized on Thursday night with an irregular heartbeat. The team sent their closer back to Los Angeles where he spent time with the team doctor in the hospital. At this time the Dodgers aren’t offering up a specific timetable for his return.

One form of treatment could require Jansen to take blood thinners, which would keep the closer out for possibly a month. The Dodgers should know more information next week, but they will be forced to play without their closer for at least a few weeks. Switch-handed pitcher Pat Venditte was recalled on Thursday night to take Jansen’s place on the LA roster. Jansen has recorded 32 saves this season for the Dodgers, and features a 2.15 earned run average in 54 ⅓ innings pitched.

Manager Dave Roberts has not named a closer in Jansen’s absence, but Scott Alexander earned the save in an 8-5 win on Thursday night. The Los Angeles Dodgers are tied with the Arizona Diamondbacks atop the National League West entering play on Saturday. The Dodgers might need to win the division in order to reach the playoffs as the Wild Card spots are currently occupied to teams from other divisions.

The Milwaukee Brewers announced that they are placing newly-acquired Joakim Soria on the 10-day disabled list with a right thigh strain. Soria injured his thigh during Thursday’s loss to the San Diego Padres that saw the Brewers bullpen give up 6 runs in the 9th inning. Soria was acquired from the Chicago White Sox prior to the trade deadline on July 31st.

Brewers manager Craig Counsell removed Corey Knebel from the closer’s role after his miserable outing on Thursday. Soria would have been the guy to replace Knebel as the Brewers closer, but his injury will prevent that. Soria racked up 16 saves while a member of the Chicago White Sox. Counsell will dictate usage based on matchups, and will not name a permanent closer. Milwaukee does have two All-Stars in their bullpen with flamethrower Josh Hader and right hander Jeremy Jeffress.

The Brewers are currently three games out in the National League Central Division behind the Chicago Cubs. Milwaukee owns the top wild card spot in the National League, but a slew of teams are right on their tail. The Brewers will need to fix their bullpen issues if they are going to reach the 2018 playoffs. Soria is expected to have a minimum stay on the DL, and should be back in 10 days.

Join us on Telegram to get even more free tips!
« Betts Completes Cycle In 9th
Indians Facing Injury Concerns »
SportingPedia covers the latest news and predictions in the sports industry. Here you can also find extensive guides for betting on Soccer, NFL, NBA, NHL, Tennis, Horses as well as reviews of the most trusted betting sites.
MLB Betting Tips, Predictions and Odds 241