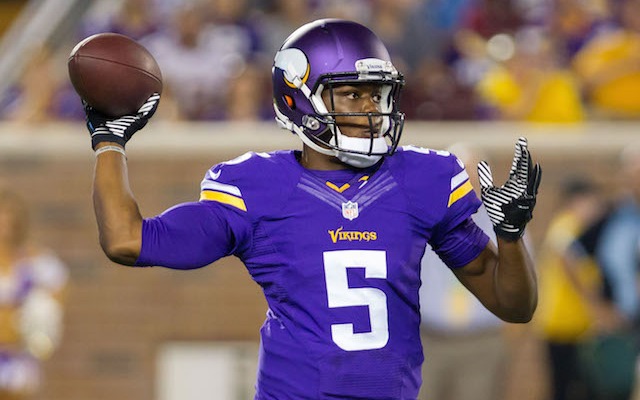 There is an interesting situation developing in New York. The Jets have made it known that their plan this year is to play veteran Josh McCown until they feel that Sam Darnold is ready to take the reins. With that plan in mind, Teddy Bridgewater seemed to be the odd man out, as he really does not fit into the short or long term goals for the Jets. However, there may be more questions after Friday’s preseason game than answers, due to the stellar play of both Darnold and Bridgewater.

Bridgewater finished the game 7 for 8 with 85 yards and a touchdown. Granted, most of his passes were short check-downs or timing routes, but it had to feel good for someone who is coming off of such a devastating injury just a short while ago. After Bridgewater left the game, Darnold entered and did not disappoint either. Darnold finished 13 for 18 with 96 yards and a touchdown. With McCown listed as the starting quarterback and Darnold already showing promises of his potential, there is absolutely no need for Bridgewater to remain in the no-mans land. Bridgewater should and will be moved to another team as soon as any other team’s quarterback shows signs of even the slightest injury. That leaves the Jets with just the question of how long to stick with McCown before turning the reins over to the rookie USC product.

That Raiders and Lions also took the field on Friday in the showcase of two teams unveiling their new head coaches. The biggest story coming out of this game is the running back battle in Detroit. LaGarrette Blount and the rookie out of Auburn, Kerryon Johnson, are going to be staples on the roster due to the financial investment and draft stock placed on the two respectively. That leaves veteran Ameer Abdullah left in roster and depth chart purgatory. Abdullah ran for 16 yards on 4 carries with a touchdown and also a catch. It was a good showing by Abdullah, but may not be enough to save his job. Abdullah has largely been a disappointment since being drafted out of the University of Nebraska. He could be a decent trade target for a team looking for a veteran presence in the backfield. Did you hear that Indianapolis?

For Oakland, Connor Cook seemed to solidify his spot as the number two quarterback on the roster behind start Derek Carr. Cook has been in a training camp battle with former first-round pick E.J. Manuel for the top slot behind Carr. Cook finished the game 11 for 19 for 141 yards and a touchdown. New Oakland coach Jon Gruden appears to be set on the issue, as Manuel barely saw the field any more than Carr.

Also in Oakland, the move to cut kicker Giorgio Tavecchio last week appears, for the time being, to be the proper transaction. Rookie kicker Eddy Piniero went 3/3 on field goals Friday night from 21, 45, and 48 yards.

Join us on Telegram to get even more free tips!
« Derrius Guice Out for Season
Saturday’s Preseason Games News and Notes »
SportingPedia covers the latest news and predictions in the sports industry. Here you can also find extensive guides for betting on Soccer, NFL, NBA, NHL, Tennis, Horses as well as reviews of the most trusted betting sites.
NFL Betting Tips, Predictions and Odds 332