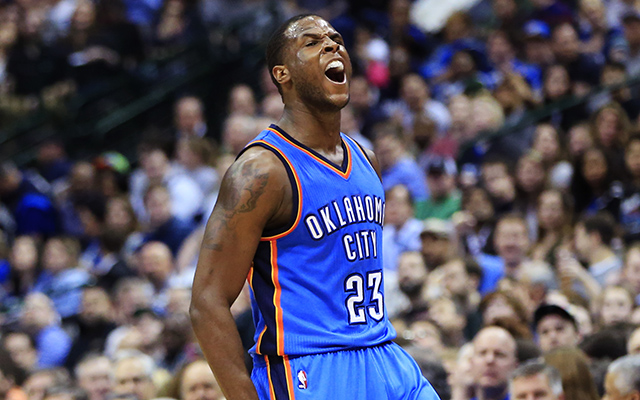 Although he’s never scored more than six points per game in a season, or ever seemingly made consecutive free throws, his health and play will have a lot to do with OKC’s success (or lack of) this season.

While he hardly ever scores and has shot better than 30% from three just once, Andre Roberson is the defensive heartbeat for this team. His length has enabled him to average better than a steal per game over the past two years, as well as a blocked shot per contest. Few guards have the natural ability to be a shot-blocker, but Roberson is up there with the best of them. Playing next to Russ, he was instrumental in helping OKC nearly get to the NBA Finals two years ago.

It was pretty clear how lost the Thunder were after his injury last season. No matter who they put in, Terrance Ferguson, Josh Huestis, Alex Abrines, none of them were able to fill the void. They couldn’t help out defensively, and the team’s identity was clearly changed. Once they went out and acquired Corey Brewer, they were better, but still not good enough. Nobody can fill the role that this man plays for the Thunder.

Roberson’s return to the team this season is major. Russ is going to need a dominant defensive player next to him, and a guy who he can run the break with. He also serves as a second shot-blocker out there along with Steven Adams, and he’s probably been putting the time in to trying to improve his dreadful shooting. He gets a lot more open looks than the average NBA player, and so he needs to start knocking them down. Thabo Sefolosha turned himself into an effective jump shooter during his days with the Thunder, and now it’s Andre’s turn.

The team added Nerlens Noel in the offseason for some depth and as a way to improve their defense. They also added Dennis Schroder for another player who can create his own shot. Both players have had a lot of success with past teams, and in OKC, the case should remain the same. Schroder can also learn a lot in practice from being defended by Roberson, about how to score on tougher players, as well as how to cover them.

Getting back to Roberson, he has a very important role for this team as the defensive leader. He had a positive plus/minus in 22 of the 39 games he played in last year before getting hurt, and the team had a 24-15 record with him in the lineup. There were only four games where the team was outscored by ten or more points with him on the floor. Again, he plays an invaluable role for this team.

Join us on Telegram to get even more free tips!
« Jordan Clarkson Looking for Huge 2018
Hawks Looking at Solid Two Guard Lineup »
SportingPedia covers the latest news and predictions in the sports industry. Here you can also find extensive guides for betting on Soccer, NFL, NBA, NHL, Tennis, Horses as well as reviews of the most trusted betting sites.
NBA Betting Tips, Predictions and Odds 1371