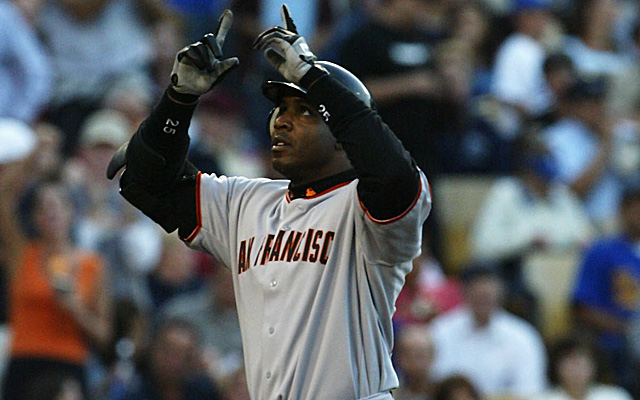 Bonds joined the San Francisco Giants as a free agent prior to the 1993 season. Bonds spent the next 15 seasons with the Giants and led the franchise through a rebirth. He spent the first 7 seasons of his career with the Pittsburgh Pirates, but became famous in San Francisco. The Giants honored Bonds with a brief ceremony before the game that included a speech from the legend.

Bonds became the 10th player to have his number retired by the San Francisco Giants. Hall of Famers Willie Mays, Willie McCovey, Orlando Cepeda, Juan Marichal, and Gaylord Perry attended the ceremony. A large number of former teammates were also in attendance, and the Giants played several video tributes on the scoreboard as part of the ceremony.

Willie Mays spoke to the large crowd at AT&T Ballpark and made a case for Bonds to be voted into the Hall of Fame. Mays chanted to the crowd, “Vote this guy in,” which drew a large ovation from the crowd. In 2015 federal prosecutors dropped their long case against Bonds that was dealing with steroid use. The use of steroids and performance enhancing drugs is the one issue that is keeping Bonds from the Hall of Fame.

Barry Bonds was one of the most feared sluggers in baseball history. Bonds won the National League Most Valuable Player seven times during his illustrious career. The 54-year-old is the all-time home run king in Major League Baseball, finishing his career with 762 home runs. Bonds hit his 756th home run on August 7, 2007, surpassing Hank Aaron’s 755 home runs to be the all-time leader.

Bonds won the Rookie of the Year Award in 1986 as a 21 year old outfielder for the Pittsburgh Pirates. He made his first All-Star game in 1990, and also won the National League MVP Award that season. He went on to win another MVP Award with the Pirates in 1992, before heading to San Francisco the next season.

The slugger won the MVP Award four straight seasons from 2001-2004 in a stretch that might be the best in baseball history. He hit 73 home runs in 2001 to set the single season record that still stands to this day. Bonds made the All-Star team in his final season of baseball in 2007.

Join us on Telegram to get even more free tips!
« Indians Facing Injury Concerns
Leonys Martin Dealing With Bacterial Infection »
SportingPedia covers the latest news and predictions in the sports industry. Here you can also find extensive guides for betting on Soccer, NFL, NBA, NHL, Tennis, Horses as well as reviews of the most trusted betting sites.
MLB Betting Tips, Predictions and Odds 241