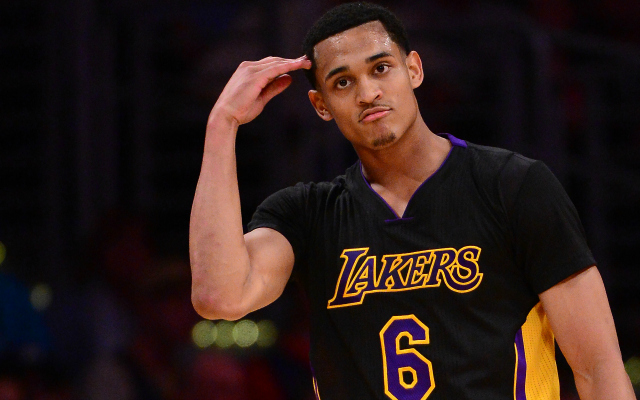 Although he struggled in the postseason last year, Jordan Clarkson is not going to be down for long. He had a nice career with the Lakers, and his production will increase in Cleveland this year. Read below for why I believe Clarkson is poised for a big bounce back.

From the time he first set foot in the NBA after his college career at Missouri, Clarkson has been getting buckets. He averaged 12 points per game as a second-round pick in his rookie year in LA, earning an All-Rookie berth. He averaged a career-best 15.5 points per game in his second year, his first as a full-time starter. He averaged 15, and 14 points per game respectively in the two years that followed. He’s shot between 43 and 45% from the floor over the course of every year of his career, a very impressive figure.

Clarkson was very bad in the playoffs for the Cavs, scoring in double figures just twice, and actually getting benched for the last two games of the NBA Finals. His totals from the postseason run were 4.7 points per game, 1.7 rebounds per game, and less than one assist per game, shooting just 30% from the floor. When he got into the game, he was always nervous it seemed, and he could just not knock down any of his jumpers. He seemed to constantly force the action. Luckily, he’s getting a chance that Deron Williams didn’t. A chance to rebound after a flop of an NBA Finals performance.

Here’s why Clarkson, I believe, is poised for a big bounce back. With LeBron now gone, there will be a lot of opportunities for him. LBJ always needed the ball in his hands, but now that the team will go through Kevin Love, they will be moving the ball a lot more. Clarkson can get into the same kind of rhythm we saw from him in LA, and with regular season Cleveland. Coming in off the bench, he will be the go-to scoring option for Cleveland when they need a punch.

It’s no surprise that he’s been scoring in double-figures for his whole career after being a second-round pick. Clarkson is great at getting his own shot, and when he gets hot, you just don’t want to be in his way. He had some nights in LA where he’d knock down a three on one possession, they’d get a stop, he’d dribble down, and then knock another one down. His line-drive jumper works very well, and this is going to be his year.

With two years and $25 million left on his deal, the Cavs will be getting tremendous value for this man.

A big year is ahead for Jordan Clarkson. Nobody will remember that finals performance by the time this year’s over.

Join us on Telegram to get even more free tips!
« Huge Offseason for Memphis Grizzlies
Andre Roberson Secret Weapon to OKC's Success »
SportingPedia covers the latest news and predictions in the sports industry. Here you can also find extensive guides for betting on Soccer, NFL, NBA, NHL, Tennis, Horses as well as reviews of the most trusted betting sites.
NBA Betting Tips, Predictions and Odds 1385