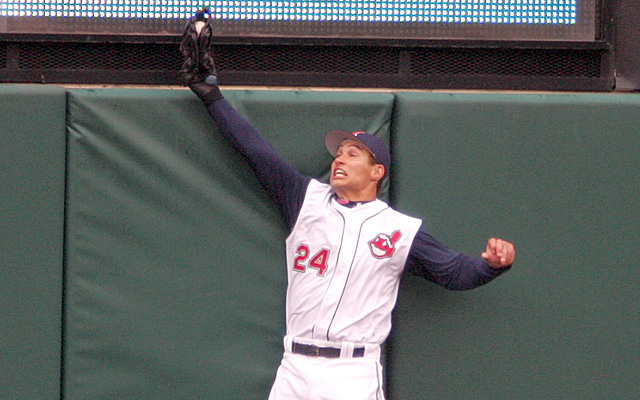 The Cleveland Indians finally gave an update on the status of Leonys Martin, and the news was positive but shocking. Martin contracted a bacterial infection and the infection become life-threatening last week. As of Monday, Martin was in stable condition and recovering, according to Cleveland team president Chris Antonetti.

Antonetti met with the Cleveland Indians in the clubhouse at Great American Ball Park and delivered the positive report to the team. The Indians were set to open up a series against the Cincinnati Indians. Following the closed-door meeting Antonetti provided an update to the media after he was urged to do so by Martin’s wife, Yaimira.

Martin last appeared in a game on August 7, when the Indians battled the Minnesota Twins. The veteran outfielder became ill after that game and was taken to the Cleveland Clinic on Wednesday morning after his condition did not improve. Tests were run and determined that a bacterial infection had entered into Martin’s bloodstream.

The specific type of bacterial infection has yet to be disclosed, and it is also unclear how or when Martin obtained the infection. The infection was not contagious, but went to work quickly on destroying Martin’s health. The toxins began to inflict damage to Martin’s internal organs, and the damage was widespread and deadly. As of Monday Martin had started to regain organ function and was starting to regain strength as well.

The Cleveland Indians acquired Martin from the Detroit Tigers prior to the July 31 non-waiver trade deadline. Martin has only appeared in six games for the Indians, but he has been productive for them since the trade. He is hitting .333 (5 for 15) with four runs driven in and two home runs in those six games. Martin was added to provide veteran outfield depth to an Indians team who is in great shape to reach the 2018 playoffs.

The Indians placed Martin on the 10-day disabled list on Thursday, but very little was made known about Martin’s condition. Several Indians players began writing Martin’s initials on their hats on Friday, and Terry Francona asked fans to say a prayer for the outfielder. White Sox All-Star Jose Abreu also wrote a message on his hat, and the outpouring of support was league-wide by the end of the weekend.

Antonetti has made several visits to the Cleveland Clinic to check on Martin since he became ill. He shared that Martin was able to communicate with him on Sunday, and was also able to get out of bed and sit in a chair for a few hours. Antonetti expressed that Martin’s recovery will be their main focus, and his availability will be known at a later date. He left open the possibility that Martin could return to the team this season.

The Indians led the American League Central Division by 12 games entering play on Monday. They are set to play the Reds in a three-game series before returning home to start a series with the Orioles on Friday.

Join us on Telegram to get even more free tips!
« Barry Bonds Honored By Giants
Robinson Cano Returns For Mariners »
SportingPedia covers the latest news and predictions in the sports industry. Here you can also find extensive guides for betting on Soccer, NFL, NBA, NHL, Tennis, Horses as well as reviews of the most trusted betting sites.
MLB Betting Tips, Predictions and Odds 241