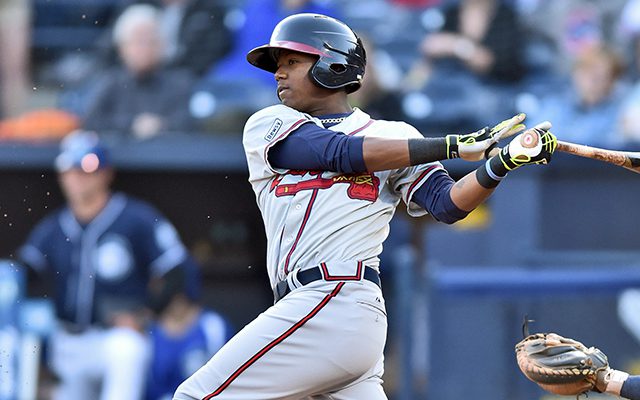 The Atlanta Braves and Miami Marlins had an interesting start to the bottom of the first inning in their game on Wednesday night. With the Marlins leading 1-0, Miami pitcher Jose Urena drilled Ronald Acuna Jr. with his first pitch in the bottom of the first inning. The Atlanta Braves immediately came pouring out of their dugouts where they were met by the Marlins team coming to the defense of Urena.

Ronald Acuna Jr. had hit a home run in five straight games, with the last three games being against the Miami Marlins. Not only that, but Acuna had hit a home run to lead off the game in three straight contests, a string that Urena was determined to end on Wednesday night. Acuna was drilled in the left elbow by the 97.5 mile per hour pitch, and was in obvious pain as he fell to the ground.

Atlanta Braves manager Brian Snitker was the first man out of the dugout as he made his way to the mound to exchange words with Urena. Snitker was ejected from the game, and after the game called the pitch, and the situation, “a damn shame.” Snitker also went on to say after the game, “He’s my kid. I’m going to protect him.”

While the two teams were near the mound shoving and arguing Acuna was getting tended to by the medical staff of the Atlanta Braves. Ordered appeared to be restored and Acuna was set to make his way down to first base. On his way there he made a detour for the mound and tossed his protective mound near the pitcher. This led to the second clearing of the benches, but no punches were thrown either time.

Urena was not immediately tossed from the game, but after a meeting by the umpires was ejected by crew chief Paul Nauert. The decision was made after everyone had calmed down and the umpires had a chance to reflect on what had occurred. The ejection brought an immediate reaction from Marlins manager Don Mattingly. After the ejection, Elieser Hernandez was brought in to replace Urena.

The Marlins pitcher has a history of control problems. He tied for the ML lead in 2017 with 14 hit batters. He entered Wednesday night’s game with 10 hit batters, which ranked second in baseball. Urena became the fourth player in baseball history to hit the only batter he faced before being ejected from the game.

Acuna went out to left field to begin the second inning, but after trying to flex his arm signaled to the bench to remove him from the game. The Braves announced that X-Rays on the left elbow were negative, but Acuna was still sore after the game. Additional tests were scheduled for Thursday. Veteran Adam Duvall replaced Acuna in left field, and the Braves went on to win 5-2 to complete the four-game sweep of the Marlins.

The homer streak is still intact for Acuna as he did not record an official plate appearance in the game. The Braves begin a four-game series against the Colorado Rockies on Thursday night.

Join us on Telegram to get even more free tips!
« A Pair of AL Pitchers Injured
Puig, Urena Suspended by MLB »
SportingPedia covers the latest news and predictions in the sports industry. Here you can also find extensive guides for betting on Soccer, NFL, NBA, NHL, Tennis, Horses as well as reviews of the most trusted betting sites.
MLB Betting Tips, Predictions and Odds 241