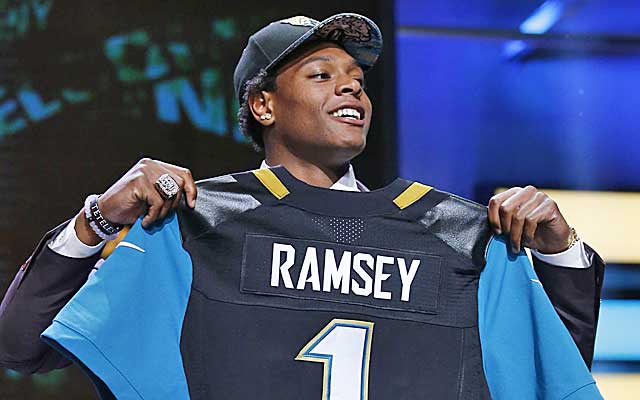 Outspoken Jacksonville Jaguars defensive back Jalen Ramsey is at it again. Just days after the team suspended him for a week due to lashing out at local media for filming an on-field incident involving Dante Fowler Jr., Ramsey was quoted in a GQ magazine article giving his thoughts on opposing quarterbacks.

In fairness, not all of his comments were harsh. Ramsey complimented Houston Texans quarterback Deshaun Watson and predicted him to be the MVP of the league in a few years time. His thoughts on Watson are pretty similar to the projections that many around the league have of the Clemson product’s ability. He also praised the play of Los Angeles Rams quarterback Jared Goff as being “above average,” which compared to some other analysis that Ramsey gave, is almost the highest praise to be had.

In terms of veteran quarterbacks, Ramsey believes that Atlanta Falcons signal-callerMatt Ryan is simply a product of Kyle Shanahan’s offense, overrated and that Shanahan’s departure for the west coast will doom Ryan. Super Bowl champion Ben Roethlisberger could not avoid being targeted by Ramsey either, as the Jaguar called Big Ben “decent at best.” That is some interesting analysis of a top tier NFL quarterback who has shined on the NFL’s biggest stage. Also, Ramsey must not recall the 37/58 for 469 yards and 5 touchdown performance that Roethlisberger put on his Jaguar defense a mere eight months ago.

The most demeaning words from Ramsey were aimed at Buffalo Bills rookie quarterback Josh Allen. Allen was selected by the Bills out of the University of Wyoming and admittedly was awful against Power 5 teams that he came in contact with. About Allen, Ramsey stated:

“I think Allen is trash. I don’t care what nobody say. He’s trash and it’s gonna show too. That’s a stupid draft pick to me. We play them this year and I’m excited as hell. I hope he’s their starting quarterback. He played at Wyoming. Every time they played a big school — like, they played Iowa State, which is not a big school in my opinion because I went to Florida State, and he threw five interceptions and they lost by a couple touchdowns or something like that. He never beat a big school. If you look at his games against big schools, it was always hella interceptions, hella turnovers. It’s like: Yo, if you’re this good, why couldn’t you do better? He fits that mold. He’s a big, tall quarterback. Big arm, supposedly. I don’t see it, personally.”

Ramsey’s interpretation of Allen’s collegiate career is hard to argue with. However, Allen has the body type and leadership abilities that shot him up draft boards and left the Bills smitten.

If there is anything we have learned about Jalen Ramsey in his young career, it is that he speaks his mind without any concern about the consequences. He revels in the idea of creating bulletin board material for opposing teams and players. Ramsey will be facing off this season and down the road with many of the quarterbacks he listed. He will have his chance to put his money where his mouth is.

Join us on Telegram to get even more free tips!
« Contracts, Holdouts and Cuts
Top 10 Positional Fantasy Rankings »
SportingPedia covers the latest news and predictions in the sports industry. Here you can also find extensive guides for betting on Soccer, NFL, NBA, NHL, Tennis, Horses as well as reviews of the most trusted betting sites.
NFL Betting Tips, Predictions and Odds 332